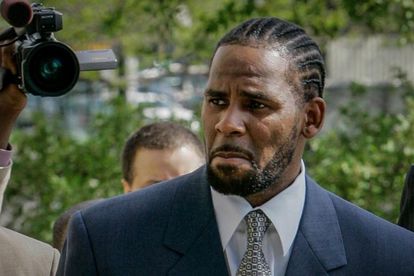 R Kelly allegedly sings to a fan while behind bars. Image via Twitter @AJEnglish

R Kelly allegedly sings to a fan while behind bars. Image via Twitter @AJEnglish

Disgraced American musician R Kelly is still setting tongues wagging even behind bars. The Happy People hitmaker – who is serving a prison sentence for federal racketeering and sex trafficking – is alleged to have sang to a young woman over the phone upon her request.

FAN GETS R KELLY TO SING FOR HER

A viral video on TikTok shows a woman asking R Kelly to sing for her. In the video, the woman is holding a phone and the Ignition singer can be heard on the other end. A few seconds into the clip, she asks the musician to sing one of his songs Love Letter, and he does – but not before taking a deep sigh.

According to the woman, on Friday 18 March she visited her father who is allegedly incarcerated in the same prison as R Kelly. When she saw the singer, who was allegedly also being visited by his daughter, she was starstruck. Explaining the viral encounter in a follow-up video on her TikTok account, she says after she had left her father called her to find out if she had arrived home safely and this is when she told him she will be telling everyone that she met R Kelly.

The woman further explained that her father handed the R&B singer the phone and that is when she asked him to sing.

“It wasn’t for commissary, it wasn’t for money. He’s just a really nice dude, genuine guy,” she explained.

In conclusion she said that she might be taking the video down because she did not get permission to post it.