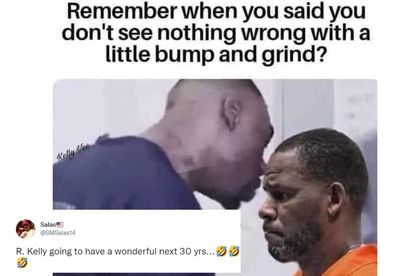 Social media users are celebrating the 30 year sentencing of R Kelly with memes.
Image via Twitter

Social media users are celebrating the 30 year sentencing of R Kelly with memes.
Image via Twitter

On Wednesday 29 June Robert “R Kelly” was sentenced to 30 years in jail – a sentence many music fans and activists around the world have welcomed.

The convicted sex offender was last year found guilty of racketeering and sex trafficking during a three-decade reign of terror.

Judge Ann Donnelly handed down the 30-year sentence – harsher than anticipated by prosecutors – at the Brooklyn, New York court. Speaking in her judgment, she told the disgraced singer: “You left in your wake a trail of broken lives”.

Outside the court, victims of R Kelly celebrated the news.

Lizzette Martinez – who was 17 years old when she met the singer – told media that she was “relieved” the trial was over. She added that whilst the 30-year sentence was not enough, She was “pleased with it”.

She added: “I never thought that I would be here to see him be held accountable for the atrocious things that he did to children”.

Another victim – Jovante Cunningham, who was 14 when she met R Kelly – also spoke out. She said: “There wasn’t a day in my life, up until this moment, that I actually believed that the judicial system would come through for black and brown girls.

On social media, R Kelly trended over his lengthy sentence, with many satisfied that “justice” had been served to his victims of sexual abuse.

Tweeps also flooded Twitter with memes about the 50-year-old singer.

@raesanni: “He liked his victims young but that 30-year sentence is full-grown”

@Dondeyforyou: “R Kelly just realized that the storm has just started and wished he could turn back the hands of time”

@iamoncraigslist: “R Kelly has 30 years to write another Trapped in the Closet”

@JamesKennedyUK: “To the fellow inmates of R Kelly and Gislaine Maxwell – please do us proud”

@Toothpaste__1: “Robert Kelly sentenced to 30 years in prison. Life has taken back all it gave him. Life is just a lesson”