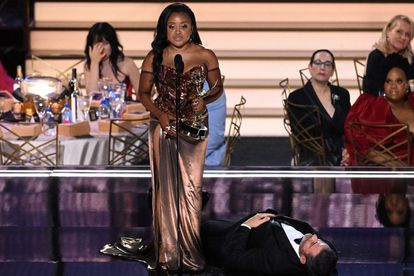 Abbott Elementary, created and written by Quinta Brunson, premiered in December 2021 and was an instant hit. The sitcom, starring Janelle James, Sheryl Lee Ralph, Tyler James Williams and Quinta Brunson, was renewed for a second season.

The series won the Outstanding Writing in a Comedy Series Award at the 2022 Primetime Emmy Awards on 12 September. Moments before the winner was announced, actor Will Arnett dragged Jimmy Kimmel on stage claiming he had one too many “skinny margaritas”. Kimmel laid on the stage as Quinta Brunson gave her speech.

“I need to thank my wonderful husband because he’s the most supportive man I’ve ever known. And my incredible cast and crew, for helping me make this show,” said the 32-year-old in her speech.

“Jimmy Kimmel owes Quinta an apology but the messed up part is every image of her accepting her award has his *ss in it. White men are really insufferable,” wrote another tweep.

“While male privilege is laying on the ground & expecting a black woman to just step around you while she accepts her hard-earning award. F*ck Jimmy Kimmel.”

“Jimmy Kimmel should have left the stage during Quinta’s speech. Highly disrespectful.”

WHAT DOES QUINTA BRUNSON HAVE TO SAY?

In a Q&A session with Variety after winning her Emmy Award, Quinta Brunson addressed Jimmy Kimmel laying on the stage during her speech. The talented writer said it “didn’t bother her” that much.

“Jimmy gave me my first big late night spot. He was one of the first people to see Abbott [Elementary],” said Brunson.

“Tomorrow maybe I’ll be mad at him. I’m going to be on his show on Wednesday, so I might punch him in the face.”