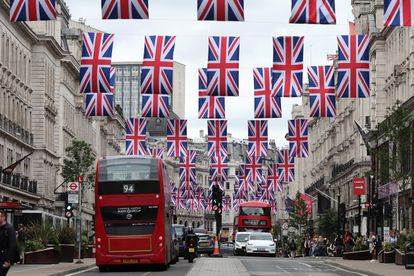 Red London buses pass beneath Union flags, put up to celebrate Queen Elizabeth’s Platinum Jubilee, in Regent Street in central London on 26 May, 2022. – Elizabeth II has been on the throne since she was 25, an ever-present figure for the lives of most people in Britain, as well as one of the most recognisable people around the world. She will celebrate her Platinum Jubilee over four days from Thursday June 2nd. Photo: Adrian DENNIS / AFP

Red London buses pass beneath Union flags, put up to celebrate Queen Elizabeth’s Platinum Jubilee, in Regent Street in central London on 26 May, 2022. – Elizabeth II has been on the throne since she was 25, an ever-present figure for the lives of most people in Britain, as well as one of the most recognisable people around the world. She will celebrate her Platinum Jubilee over four days from Thursday June 2nd. Photo: Adrian DENNIS / AFP

Next weekend, people across the UK and beyond will celebrate the 96-year-old queen’s Platinum Jubilee, marking her 70th year on the throne.

And in the little village of Bidford-on-Avon, everything has to be perfect for the occasion.

Here, as in most parts of the UK, Queen Elizabeth II remains extremely popular, and a small team of volunteers are putting in long hours to make sure the event is one to remember.

“I wake up at three or four o’clock in the morning, and I suddenly think of something that we might have forgotten to order,”

With just days left before the celebrations start, she is working against the clock to get everything ready on time.

Her role in this pretty village in central England has been “full-time for three months”, she told AFP.

That morning, firefighters came with a long ladder to hang red, white and blue bunting along the main street. A few hours later, a group of traditional dancers were to hold a final rehearsal.

Every detail has been attended to for the long weekend from June 2 to 5, over which the celebrations will run.

Its programme for the four days of celebrations is impressively long: a best-decorated home and garden competition, a fancy-dress contest, a torch run and lighting of a beacon, cricket, tennis, football, bowling, a concert by the local choir as well as exhibitions and talks.

The village is also holding a cake competition and opening a Jubilee garden where several time capsules will be buried — one to be reopened in 50 years’ time — recording aspects of life in 2022.

The celebrations will culminate Sunday with a street party with a band playing, Irish dancers and Morris men, a children’s fairground ride and refreshments.

The streets of neighbouring Alcester village are also decked with red-white-and-blue pennants and large portraits of the Queen against a background of Union Jack flags.

Village shops have window displays featuring commemorative mugs and other china, teaspoons from the 1981 wedding of Prince Charles and Diana — even two little porcelain corgis (the Queen’s favourite dogs).

“I know lots of people think we shouldn’t have a monarchy any more, but for me, it’s part of tradition and it’s part of our original identity and culture,”

She has two young sons now, but she recalls how her grandmother every Christmas would insist on watching the Queen’s speech on television.

“I feel that she’s somebody that sort of steered the country … a figurehead for the country and also the leader of the (Anglican) Church. I think that’s quite important,”

“She’s a remarkable woman and really, you know, is a great asset to the country,” says another villager, Philomena Hodgetts, 73. She describes the queen as “unflappable” and “someone to look up to”.

In the feverish preparations for the Jubilee, some share their memories of the monarch.

Phyllis Losh, whose son fought in the Gulf War, recalls being invited to meet the Queen at a military base.

“I am tiny, and she was on a par with me. She’s got the most beautiful, beautiful eyes,” she said.

She laughed as she remembered having “to do a curtsy with a cup and saucer and a handbag.

“She is amazing, absolutely amazing,” “She does everything with such dignity.”

Steve Jackson, a retired local man who has organised the concert of the local Community Choir stresses how much the monarchy has changed during his lifetime.

“We never used to see much of the royal family. They were very private, living in Buckingham Palace. These days they’re much more open,” he says, citing the 73-year-old heir to the throne, Prince Charles, and even more so his 39-year-old son William, who is next in line.

No one gives much credit to speculation that the Queen, who has cut down on public appearances due to mobility issues, could abdicate, or that the throne could pass directly to her grandson William.

“I don’t think she’s going to abdicate. Because I think she sees it as a duty to be queen,” “And I think Charles will take over because it’s tradition.

In the short term at least, Bidford residents are more concerned about the weather forecast, praying that rain will not spoil their party.