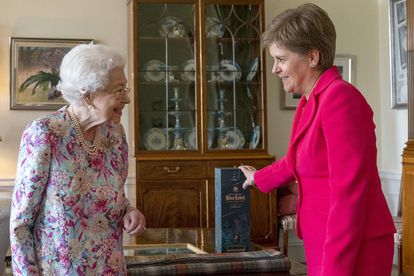 Queen Elizabeth II on Wednesday met Scotland’s First Minister Nicola Sturgeon, the day after the politician put her government on collision course with London by announcing plans to hold another independence referendum.

The monarch, 96, met Sturgeon at the Palace of Holyroodhouse in Edinburgh, but no details of their conversation were released.

She is in Scotland for the annual “Holyrood week”, when she and other members of the royal family traditionally carry out a number of engagements in the country.

ALSO READ: Woody Allen confirms shooting next movie in Paris may be his last

The queen has massively scaled back public engagements since a bout of ill health in October left her with mobility issues, and was not expected to make the long journey north from Windsor Castle.

But she has recently appeared in better health, and did not use a walking stick when meeting Sturgeon, according to video footage.

The Scottish leader wants to split with the UK, and on Tuesday announced plans for a referendum to be held on 19 October, 2023.

Addressing the Edinburgh parliament, Sturgeon conceded that her devolved administration may lack the power to call the vote without London’s approval and is seeking an opinion from the UK Supreme Court.

Eight years ago, Scotland voted to stay in the United Kingdom, and current polls suggest Scots remain evenly divided on the question of independence.

Speaking en route from Germany to a NATO summit in Spain, Johnson vowed to study Sturgeon’s plan and “respond properly”.

As head of state, the queen is politically neutral, but observers said her mere presence in Scotland was a subtle reminder of tradition and Scotland’s three-centuries-old union with England.