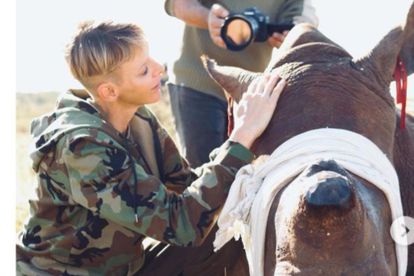 Princess Charlene of Monaco has been on a visit to South Africa to raise awareness in the fight against rhino poaching. Image Christian Sperka via Instagram @hshprincesscharlene

Princess Charlene of Monaco has been on a visit to South Africa to raise awareness in the fight against rhino poaching. Image Christian Sperka via Instagram @hshprincesscharlene

Princess Charlene of Monaco missed the popular Monaco F1 Grand Prix on Sunday 23 May after she fell ill in South Africa and therefore cannot travel home to the European principality.

The Palace of Monaco confirmed the news, saying that she was supposed to be a guest of honour this past weekend before she contracted an ear, nose and throat (EAT) infection.

“Unfortunately, she will not be able to attend the Monaco Formula 1 Grand Prix. SAS The Princess Charlene sends her best wishes to the Automobile Club of Monaco, organiser of the event, as well as to the drivers and teams involved in this great automobile competition.”

Before she contracted the infection, the former South African Olympic swimmer returned to South Africa in order to raise awareness about rhino poaching, according to SA People. Photos on her Instagram page, posted on Thursday, 20 may 2021, show the 43-year-old princess out in the bush with her arms around an anesthetised rhino while its horn is being cut off.

The palace also confirmed her commitment to the fight against rhino poaching earlier this year, saying: “H.S.H. Princess Charlene is committed to wildlife conservation in Africa.”

The South African branch of the Princess Charlene of Monaco Foundation also said that the princess recently travelled to South Africa and took part in “essential conservation work”.

“The Princess is committed to wildlife conservation in SA and fighting rhino poaching which is pushing rhinos to the brink of extinction,” they added.

The foundation also shared that a rhino in South Africa is killed for its horn every 22 hours. The foundation stressed: “Therefore, we have to protect our rhinos and their future by dehorning them, safely and as gently as possible.”