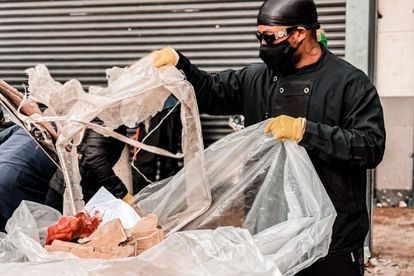 Prince Kaybee takes to the streets to clean up. Image via Twitter @PrinceKaybee_SA.

Prince Kaybee takes to the streets to clean up. Image via Twitter @PrinceKaybee_SA.

Kabelo Motsamai, popularly known by his stage name DJ Prince Kaybee, took to the streets of Daveyton, a township in Gauteng, on Thursday 15 July to help the community clean up after the riots and looting that have taken place.

While most celebrities are using their social media accounts to do the talking, Prince Kaybee has taken to the streets to walk the talk.

A whole host of celebrities have shared their opinions on the riots and looting that has been taking place in KwaZulu-Natal, Gauteng and Mpumalanga during the course of the week.

Boity, Thusi Mbedu and Cassper Nyovest expressed that they are against looting while television host Jub-Jub has openly said “let people steal if they have to steal”.

Now, Prince Kaybee is the first local celebrity that we know of that has actually taken to the streets to help restore South Africa. Earlier this week, Prince Kaybee took to Twitter to encourage people to create jobs and stepped up himself by calling on truck owners and truck drivers to help him meet a contract.

He also took to the streets to help the community of Daveyton clean Mayfield Square and Daveyton Mall in Gauteng following the aftermath of the riots and looting that had taken place. Just like the DJ, many communities across the affected provinces have come together to help protect each other and restore the areas around them that have been destroyed.

PRINCE KAYBEE TAKES TO THE STREETS

This is not the first time Prince Kaybee got his hands dirty trying to support people around him. He has previously joined #FeesMustFall protests at the beginning of the year and offered to join a protest against lockdown level four recently.

“It was an honor to serve with you @MbaliHlopheSA. To the community of Daveyton we together managed to clean the Mayfield Square and Daveyton Mall, I’m inspired,” wrote Prince Kaybee on Twitter.

Actress and DJ Thuli Phongolo took to the comments section of the post to ask Kaybee about the pyjamas he wore on his clean up. Kaybee responded saying he isn’t far from home.

While others were impressed with Kaybee coming out to help the community and do his bit.