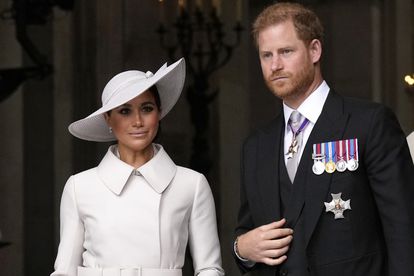 The Duke and Duchess of Sussex Prince Harry and Meghan Markle have returned to California on Tuesday 20 September, following an extended mourning period for Queen Elizabeth II, according to a report by Page Six.

Page Six reports that Prince Harry and Meghan Markle have flown back to California. This follows an extended mourning period for the death of Queen Elizabeth II on 8 September. The Duke and Duchess flew back to California on Tuesday 20 September, a day after the Queen’s state funeral on Monday 19 September.

THE DUKE AND DUCHESS OF SUSSEX ARE RETURNING TO THEIR KIDS

Prince Harry and Meghan live in Montecito with their children Archie (3) and Lilibet (1). The two children stayed behind in California with Meghan’s mother Doria Ragland while their parents were in England for the Queen’s funeral.

The couple’s move came after they quit their royal duties in 2020 and went on to start a new life in California. The pair have dropped some bombshells after their “MegXit” which led to some tension between the pair and some members of the royal family.

However, King Charles III extended an olive branch to the pair in his first address to the nation as King.

“I want also to express my love for Harry and Meghan as they continue to build their lives overseas,” he said in a pre-recorded video message that aired on TV on Friday 9 September.