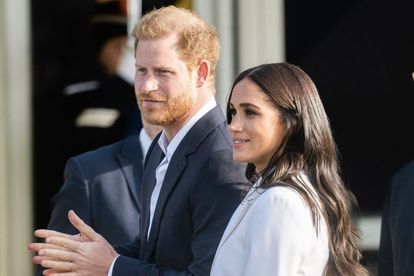 Prince Harry and Meghan made their first public European appearance since leaving the Royal Family at the Invictus Games in the Netherlands. Image via Twitter @samshussein

Prince Harry and Meghan made their first public European appearance since leaving the Royal Family at the Invictus Games in the Netherlands. Image via Twitter @samshussein

Britain’s Prince Harry and his wife Meghan on Friday made their first joint public appearance on this side of the Atlantic since quitting royal life and moving to North America two years ago.

The Sussexes attended an evening reception in the Dutch city of The Hague for the Invictus Games, a day after a visit with his grandmother Queen Elizabeth II in Britain on Thursday.

Harry, who served with the British army in Afghanistan, founded the event for disabled military veterans that starts on Saturday.

The Duke and Duchess of Sussex on Thursday met Queen Elizabeth, who will celebrate her 96th birthday in a few days, at Windsor Castle.

Harry, 37, and his wife, 40, were criticised by British tabloids for skipping Prince Philip’s memorial service in Westminster Abbey last month.

Philip, who was married to the queen for 73 years, died last April just weeks short of his 100th birthday.

Harry and Meghan had not visited the UK together since their decision to step aside from the royal family.

More than 500 participants from 20 countries are taking part in the Invictus Games, which have been postponed twice because of the coronavirus pandemic.

Just before the prince’s arrival, the Ukrainian team made their arrival to great applause.

The team of 19 people from war-torn Ukraine arrived in the Netherlands to take part but the group regretted the absence of one participant, imprisoned in the besieged Ukrainian city of Mariupol.

The paramedic, Yuliia Paievska, known as Taira, is “in danger of death now”, a spokeswoman for the team told AFP.

“She is the only woman on the team and was due to compete in archery and swimming,” the team said in a statement.

On Saturday, the royal couple will attend the opening ceremony of the games, with Prince Harry due to deliver a speech.

The Invictus Games, the first of which took place in London in September 2014, have been a recurrent theme in Harry and Meghan’s relationship.

It was during the 2017 games that the prince made his first public appearance with the American ex-actress. The following year, they were in Sydney, a few days after announcing she was pregnant.

Harry and his wife quit life as frontline royals and decamped to Canada and then California two years ago.

As a result of their decision, the UK government withdrew his taxpayer-funded protection on visits back to Britain, a decision that Harry is challenging in the courts.

The queen, who has been in fragile health, marks her record-breaking 70th year on the throne in June with public events due to be held over four days to mark the occasion.

The Invictus Games will end on 22 April.