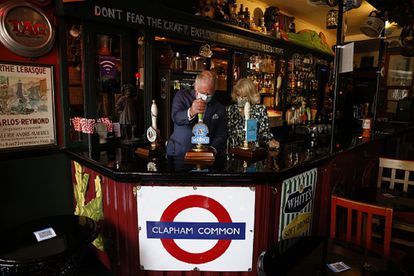 Prince Charles, Prince of Wales and Camilla, Duchess of Cornwall pour a pint in a pub as they visit Clapham. Image: Heathcliff O’Malley – WPA Pool/Getty Images.

Prince Charles, Prince of Wales and Camilla, Duchess of Cornwall pour a pint in a pub as they visit Clapham. Image: Heathcliff O’Malley – WPA Pool/Getty Images.

Prince Charles recently joked that he would like to visit every Prince of Wales pub in the United Kingdom as he enjoyed a post-lockdown pint on a trip to Clapham in south London.

Prince Charles pours himself a pint

It looks like the heir to the throne and his wife Camilla were in were in good spirits during a tour of the High Street on 27 May 2021.

According to Metro, the couple popped into a barber and visited a Michelin-starred restaurant as they celebrated the re-opening of the economy now COVID-19 infections have eased. They also visited the theatre, a florist, a pet shop, and the local fire department. Jam-packed indeed…

He laughed out loud as he tried to sip his beer through his face mask while he told the landlord that he’d “always thought it would be rather fun” to go around a visit every Prince of Wales pub, adding: “hopefully I’d get a free drink in each on”.

The latest records show there are 158 pubs named after the Prince of Wales in the UK.

Landlord Dermot Connell later said it was exciting to have “the Prince of Wales coming to the Prince of Wales”, adding: “It’s good that he’s getting out and about and showing people it’s now safe again to be in the pubs.”

And as for the pint, “he seemed to like it”, Connell said. And everyone else seems to have enjoyed watching his “mask manoeuvre”! Watch from the 2:45 mark.

The visit came the day before Charles’ youngest son Prince Harry is set to appear in the second part of his AppleTV+ series with US host Oprah Winfrey.

Last week Harry accused accused his father of making him “suffer” as a child in the show, titled The Me You Can’t See.

Prince Charles was said to be deeply hurt by the latest allegations, with Harry saying he and his wife Meghan Markle felt “trapped” in the family and were left with “no option but to leave”.

The latest episode, which airs on Friday 28 May will see Harry and Oprah discuss mental health issues as part of a town hall discussion.