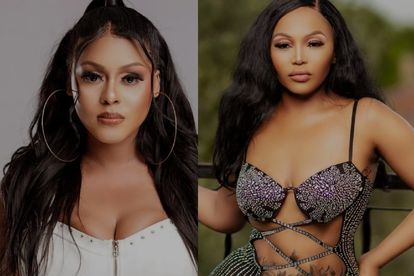 Inno Morolong made damning allegations about Tebogo Thobejane and a president, Image via @innomorolong @tebogocthobejane/Instagram

Inno Morolong made damning allegations about Tebogo Thobejane and a president, Image via @innomorolong @tebogocthobejane/Instagram

Inno is known to cause controversy and stir up drama on social media, and her latest rant is no exception. During her Instagram Live in the early hours of Friday, 25 March, the socialite (who was recently accused of physically assaulting a friend) dragged Tebogo for filth.

The drama started after the Muvhango actress allegedly called Inno “an old rag”. In retaliation, she alleged that the actress sleeps with multiple men. Threatening to expose the list of men, she then claimed that Tebogo is jealous of reality TV star and rapper Faith Nketsi – saying she even stalks her on Instagram using different burner accounts.

“Do you know that you’ve been checking Faith Nketsi with fake accounts? You wanna be her so bad that you even had to be f**king friends to get those bracelets,” she said.

INNO CLAIMS TEBOGO BEEN WITH ‘THE PRESIDENT’

Her rant did not stop there as she also made damning claims that the actress has been with “the president”.

Her video went on for several more minutes as she made more claims. Among other allegations, she said Tebogo is a bad mother and alluded to her using “substance”.

Twitter user, Musa Khawula, shared a thread of the video. Watch below:

Since the allegations, tweeps want Inno to explain which president she was talking about.