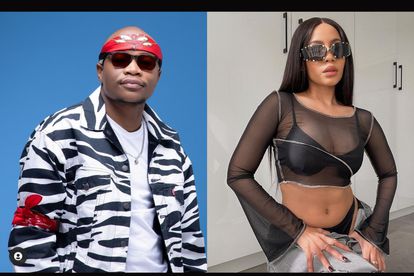 Actress Thulisile Phongolo clapped back via a tweet on Sunday 15 August at rumours that she is dating Jerusalema hitmaker Master KG.

The dating rumours began when Thuli Phongolo replied to a tweet by Master KG on falling for older women. This led to the “Twitter Police” assuming that the actress and musician are dating.

The actress thereafter took to Twitter to shut down the rumours.

She then said that she and Master KG are just friends.

TWEEPS REACT TO ‘PLEASE RESPECT ME’

While addressing the rumours, the actress added “please respect me” which triggered Tweeps, who thought she meant that Master KG is not the type of guy she would date.

The actress is so private about her love life, all tweeps have at their disposal is speculation. She was previously rumoured to be dating President Jacob Zuma’s son, Duduzane Zuma. However, she denied these rumours as well.

“Sir, I don’t have any personal association with anyone from the Zuma family. I had a passport and visas way before the rumours that are simply not true surfaced. I don’t know Duduzane personally either and that’s the truth. The rumours were baseless. STOP WITH THE LIES” said Phongolo in a tweet.

Duduzane Zuma confirmed that he never met Thuli in an interview with Mac G on an episode of Podcast and Chill but complemented her beauty. However, the actress did not seem to feel the same way as she slammed the Zuma’s in a tweet when talking about the unrest that took place in certain provinces of South Africa in July. This was in relation to Duduzane Zuma’s “loot carefully and responsibly” comment.