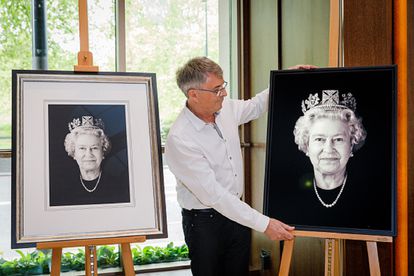 A new portrait has been unveiled to mark Queen Elizabeth II‘s Platinum Jubilee.

The never-before-seen portrait was taken by Rob Munday nearly 19 years ago during a photoshoot to create the first officially commissioned 3D hologram of the Queen.

According to Page Six, the photograph, entitled Platinum Queen: Felicity, went unnoticed in Munday’s archives until he recently rediscovered it. It shows the Queen reacting to her senior dresser Angela Kelly as the pair prepared for the shoot at Buckingham Palace.

“The Queen’s daily life is so full of responsibility and duty that it was wonderful to see this fleeting moment of relaxation and pleasure,”” he said. “It is an uplifting portrait, so different from many of the more sombre portraits commissioned in recent years and a befitting celebration for her Platinum Jubilee.”

The portrait has been described as capturing “the twinkle in the Queen’s eye” and “the deep bond and trust” between the monarch and her senior dresser, with the piece dedicated to their 20 years of friendship.

Queen Elizabeth II celebrated her 96th birthday on 21 April, in the same year that marks her 70 years on the throne.

The Queen has traveled to Sandringham, her estate in Norfolk, eastern England, for a private break.

A portrait – which was taken on the grounds of Windsor Castle in March – was released to mark the occasion and shows the monarch standing between two fell ponies named Bybeck Nightingale and Bybeck Katie.

What’s more, as part of the celebrations, portraits of queens who have ruled Britain will feature in a month-long program of exhibitions at Sotheby’s auction house.

The exhibition, which will run from 2 May to 15 June, will also feature portraits of Mary, Queen of Scots, Queen Victoria, Queen Anne, Mary I, and Mary II, lent from aristocratic and other British collections. The portrait of Andy Warhol’s 1985 “Reigning Queens” featuring Queen Elizabeth is also included. It is reported that Warhol’s image is a “richly coloured reinterpretation” of the official photographic portrait taken in the Queen’s Silver Jubilee year.