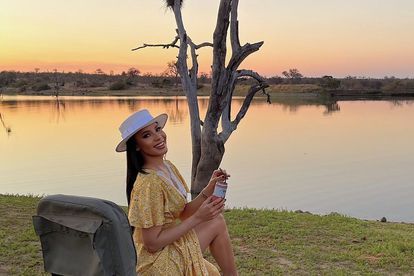 Phil Mphela has come out to defend Thuli Phongolo, who has been accused of “lying”about contracting Covid-19 …

According to Phil Mphela, Thuli Phongolo was meant to accompany him and a group of other celebs as part of a promotional train trip around South Africa. The trip was organised as part of the “Friends of Amstel” celebrity campaign.

The group were tested for Covid-19 ahead of their departure, which is where Thuli reportedly learnt of her results.

He posted: “Let’s dispel some fake news. Thuli was meant to be on the same trip with us but tested positive when we all got tested before boarding the train to CPT.

“The weekend announcement was not something planned. I was there. Thuli was booked and in Pretoria at the train station but had to not board and leave because of the test we all took.

Phil also denied reports she was “paid” by government officials to tweet about the virus.

“There is no government conspiracy or payment. Thuli tested positive and was responsible enough to alert anyone and didn’t make the trip.”

Phil also set the record straight on a wild rumour that Ntando Duma went on a date with Nigerian superstar Wizkid.

Over the weekend, the actress and media personality teased fans that she had a one-on-one encounter with the rapper.

But unfortunately for Ntando – who was also on the train trip with Phil, was left with egg on her face. Phil spilled the tea in a video clip, revealing that Ntando never once left the train.

ALSO READ: Are they or aren’t they? Mr JazziQ responds to Thuli Phongolo romance rumours