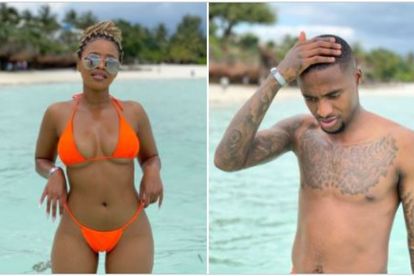 This after the “Twitter police” spotting the duo together in Zanzibar.

Rumours of the duo dating began when the actress posted an image of herself in an orange bikini and sunglasses in the ocean.

Tweeps zoomed in on Natasha’s camera man through her reflecting sunglasses and concluded that it is the Orlando Pirates player.

A PICTURE IS WORTH A THOUSAND WORDS

Lorch and the actress took several pictures in Zanzibar, which convinced tweeps that the two are a couple.

Even though the two never posted pictures on their social media accounts together, their images exposed them.

It seems they’re baecationing together as they appear to be at the same location at the same time.

The ‘lovebirds’ have been trending over the weekend with many on social media congratulating them.

As I said, from what I know, they are friends. But maybe, they have taken their friendship to the next level, you should ask him.

She was even once rumoured to be dating her very good friend Lasizwe.

Thahane’s romance with Anga began when the duo took one innocent picture together.

Anga and Natasha fueled dating rumours as they often hung out together, posted pictures and clips of their time together on their Instagram Stories.

He addressed the rumours of him and Nandi dating on Podcast and Chill with MacG and said that he never really dated Nandi.

The actor said they were working on a campaign together and were just shooting a lot of content at his place.