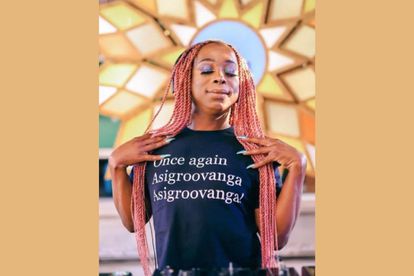 Olwethu “Olwee” Mlotshwa or simply just Olwee has wowed South Africa with his DJ and directing skills. Olwee is a fierce entertainer who gives 100% to all his performances and is often praised for his infectious on-stage presence.

Unfortunately for Olwee, he was on the wrong side of Twitter on Sunday 17 October when a video of one of his performances surfaced. He was accused of stealing internet sensation Uncle Waffles’ light after she trended. Some of the comments were homophobic but a strong willed Olwee shook off the negativity.

THE VIDEO THAT STARTED IT ALL

Uncle Waffles topped Twitter’s trending lists shortly after a video of her entertaining a large crowd went viral. While many gushed over Uncle Waffles’ talent, a Twitter user used the opportunity to post a video of Olwee also stunning a crowd with his dance moves but tweeps were not impressed.

Some accused Olwee of copying Uncle Waffles and accused the Twitter user of “setting Olwee up” for the wrong reasons.

One Twitter user wrote: “Everyone wants to Waffle now.”

“Another wrote: “You posted this on purpose for the exact reaction it’s getting. It’s giving cyber bullying.”

Speaking to IOL about the backlash, Olwee mentioned that he did not know who Uncle Waffles was until she started trending. Olwee also said “everything that happened” was laced with homophobia.

“Musa went and chose that video and posted it during this whole thing, while everyone was talking about Uncle Waffles, knowing very well that the story is gonna turn and be around me.”

“People were laughing at how I’m dressed. Inside the comments, there were people who were saying ’What is this?’ Not ’Who is this?’ I was described as a ‘what’ by various people.”

The Kings x Queens hitmaker also mentioned that in the video he is off beat because the audio is not the same as what was playing when the video was taken.

“I definitely believe that people knew that the beat that’s on there is not the same one as the actual thing that’s happening on there, but because of their homophobia, people were like ‘Okay, in fact we’re gonna laugh at this one.’”

SUPPORT POURS IN FOR OLWEE

Olwee took to Twitter on Monday 18 October to thank everyone who had his back. He reminisced on a LiveAmp mix he did 7 years ago writing: “I trended 3 days because of homophobic remarks on social media. Bad remarks will never deter me. I’m still here living my dream because there’s way more love. Drake my foot. Been dancing!”

Media personality Pearl Thusi was among the people who supported Olwee and wrote: “So proud of you babe! So proud!”

Another tweep wrote: “I hate how people like to pin people against each other. Why can’t people be celebrated for their wins in this industry without having to bring other people down!”