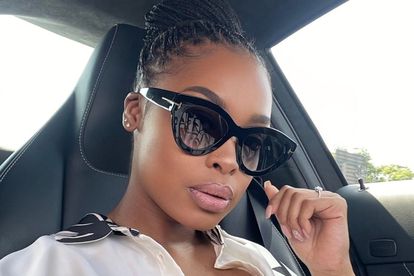 K Naomi is officially a momma!
Image via Instagram
@knaomin

K Naomi is officially a momma!
Image via Instagram
@knaomin

K Naomi is officially glowing….and whilst some of it has to do with the rock on her ring finger, it’s mostly thanks to the bun in her oven!

The singer announced her pregnancy in a sweet – and stylish – baby reveal on Instagram.

K NAOMI: BABY P IS ON THE WAY

K Naomi announced her engagement to her “best friend” just last month, and continued to share the good news with her fans.

She captioned a clip of her pregnancy announcement: “Oh Baby! Another beautiful chapter… So excited, so nervous, Baby P is on the way! And so the journey begins…#AGodThing”.

In the video reveal, the singer is seen getting glammed up for a photoshoot, before picking a gorgeous gold number to wear. Moments later, she then shows off her burgeoning belly – and continues to flaunt her massive engagement ring.

The star was inundated with well-wishes from friends and her star pals including Lasizwe, Basetsana Kumalo, Boity and Liesl Laurie – whose husband Musa Mthombeni has hinted at their own baby rumours.

A BUNDLE OF JOY FOR EX-IDOLS STAR

Another celeb who is also expecting is former Idols SA contestant Neliswa Mxakaza – who just like K Naomi is also a bride and mom-to-be.

Neliswa appeared on season nine of the show alongside her twin sister Anelisa.

“A whole Makoti and a mother to be”, she shared of the new chapter in her life.

Neliswa got engaged to her partner fiancé Sandile Makhubela on her birthday in November last year.

She shared of the special occasion: “Thank you so much to this special person who sacrificed everything for me and our love. I’m so grateful to God for giving me you. I have a lot to say but I will stop here. Thank you for making my birthday day a special one. I love you. May God be the centre of everything”.