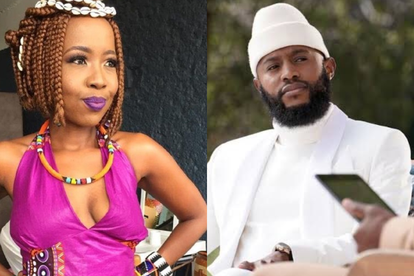 Ntsiki Mazwai says that Mohale must open a case against Somizi. Image via Twitter @ntsikimazwai@mohale

Ntsiki Mazwai says that Mohale must open a case against Somizi. Image via Twitter @ntsikimazwai@mohale

South African human rights activist and poet Ntsiki Mazwai has had it with media personalities Somizi Mhlongo and his estranged husband Mohale Motaung. For over a year now, the pair have hogged headlines as stories of abuse and other kinds of dramas surrounding their relationship were aired on TV. It appears many South Africans including Mazwai are tired of hearing about it.

Taking to her Twitter page on Thursday this week, Mazwai called on Mohale to head to the police station and open a case of abuse against Somizi or keep quiet about it.

Ntsiki Mazwai is gatvol of Somizi and Mohale

Ntsiki Mazwai – like many other social media users – have had their fair share of Somizi and Mohale.

Once one of the country’s most envied couples, they are now starting to bore people with their endless drama and conversations about their failed relationship.

Reading many people’s minds about the situation, Ntsiki headed to Twitter to tell Mohale to either go to the police with the abuse claims or keep it to himself.

“Mohale must stop with social media and open a case. Otherwise, he must leave us alone.”

For the first time in a while, many people agreed with her and headed to the comment section to complain about Mohale and Somizi.

Others however defended Mohale:

“As a victim/survivor, it is his right to open or not to open a case, that doesn’t invalidate his experience. He has every right to tell his story anywhere and anyhow – just like we can choose to listen or not – however silencing him is a big No!”

“He’s an attention seeker. He likes the attention.”