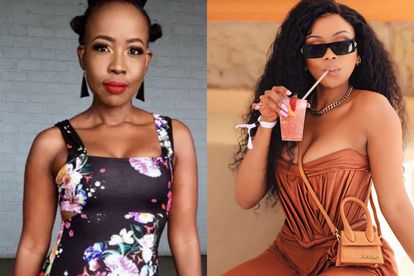 Controversial poet Ntsiki Mazwai has taken yet another aim at media personality Bonang Matheba, via a tweet earlier today (23 August).

Ntsiki Mazwai is known for her unapologetic opinion as she often takes to Twitter to share her thoughts with her 296 000 followers and who ever else is watching. She recently took a shot an South African actress Thuso Mbedu calling her “over hyped”.

Now, Ntsiki is back to picking at her old target, media personality Bonang Matheba. Ntsiki implied that Bonang does not own her beverage brand, House of BNG, saying that she is just a “marketing gimmick” used to sell the products.

“Believing Bonang owned the wine was like believing she owned Revlon…….. She is just the marketing gimmick to sell these products. Not the owner,” wrote Mazwai on Twitter.

As expected, Tweeps were yet again not impressed by Ntsiki’s opinion, taking to the comments section of the post to let her know. Tweeps didn’t seem to care whether Bonang owned the product or not, they still admired her for making “boss” moves.

Ntsiki thereafter went on to praise herself for being an “entrepreneur” without “copy and pasting” her name onto a brand.

“Entrepreneurship is what I’m doing with my beadwork…. Where I own the whole value chain for my product and make ALL the decisions. Pricing, marketing, design, pay workers. Everything. It is not this cut and paste your name onto other people’s products,” wrote Ntsiki Mazwai in a tweet.

This is not the first time the poet has picked on the media personality. In October 2020, Ntsiki posted a thread of tweets calling out Bonang for posting pictures “wearing sunglasses and outfits” but not any entrepreneurial posts, concluding that she does not actually own her beverage brand.

Bonang was unphased by Ntsiki’s tweets. When a fan asked her if she saw the poet’s tweets about her she said “who’s that?”