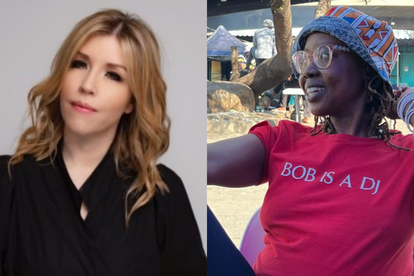 South African poet and human rights activist Ntsiki Mazwai is well-known for her controversial opinions and insistence on stirring reactions on social media. The 38-year-old entrepreneur and podcaster have once again left Twitter users feeling worked up after heading to the app to share a very controversial post about News24 journalist Karyn Maughan who has been dragged to court by the Jacob Zuma Foundation after she allegedly obtained Zuma’s medical document from National Prosecuting Authority of South Africa (NPA) prosecutor Billy Downer who is also facing charges.

According to Mazwai, Karyn is a racist who was attempting to”bully black people”.

Ntsiki Mazwai is not one to hold back – even when she has the harshest of things to say.

While she has found herself in hot water over her comments a number of times, she continues to say things that leave social media users absolutely shocked.

Her latest comments have been about Karyn Maughan – the News24 journalist who was served with a criminal summons by the Jacob Zuma Foundation and has accused the specialist writer of receiving former president Jacob Zuma’s leaked medical documents from NPA prosecutor Billy Downer, TimesLive reports.

According to Mazwai, Karyn’s decision to write a story that pertained to information about Zuma’s health was a racial attack.

She also added that Karyn had “violated” Zuma’s personal rights.

“The racist Karyn thought she could abuse black people freely… And violate their personal rights. Because whites are our bosses and we are their dogs. Zuma is not a Bully… Karyn was wrong. Period.”

While some people agreed that Zuma’s privacy had been violated, others condemned Ntsiki for pulling the “race card”.

Many people called on Zuma to face legal action himself.

“I’m not worried about Karyn, but the complainant who must go and testify and be cross-examined for 2 days, will he attend! He ran away from the Zondo Commission and has been avoiding courts for 16 years “

“How much for tweeting such nonsense and degrading your Sense of being? How can Karyn be wrong when the one-page letter was part of the court record? Public knowledge. Oh have u ever thought why this old man loves to sing I want my day in court to spill the beans but always runs”