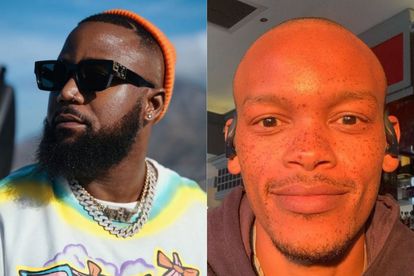 Nota Baloyi suggested that he and Cassper Nyovest settle their differences in a rap battle instead of a boxing match. Images via Instagram @casspernyovest @lavidanota

Nota Baloyi suggested that he and Cassper Nyovest settle their differences in a rap battle instead of a boxing match. Images via Instagram @casspernyovest @lavidanota

Just last week, former entertainment manager Nota Baloyi was at Cassper Nyovest’s throat hurling insults and challenging him to fights. Now it seems he may have had a slight change of heart after once again taking to Twitter – this time to sing Nyovest’s praises.

Naturally, most of the internet was left confused while others decided that Nota was simply trying to trend again.

Nota Baloyi tries to creep back into Cassper’s good books

There is nothing in the world as confusing as the internet and the people who decide to use it. Nota Baloyi is living proof of this and continues to baffle everyone almost every day.

The entertainment manager shook everyone last week when he shared a photo of his savings account online and asked Cassper Nyovest to do the same.

After Cassper said no, he hurled insults at the rapper even taking it as far as speaking about his baby and personal relationship with the child’s mother.

He has once again taken to Twitter but this time singing a different tune. According to Nota, who is most famous for working with Kwesta, the best decision he ever made was to feature Cassper on Kwesta’s Ngud.

“In life you get a few opportunities to propel yourself to greatness. One of the best decisions I’ve made was insisting on having Cassper Nyovest on this song.

“Even released a day after the anniversary of Doc Shebeleza out of respect to him. We needed it to shake up. Fill up FNB”

“Dj Maphorisa is the one who insisted to have Cass on, according to Kwesta. Stop lying.”

“Cassper is ur role model”