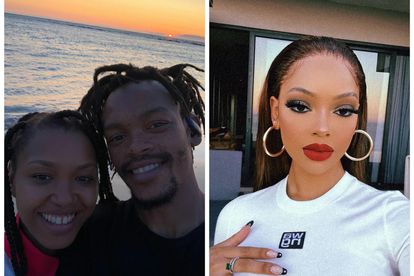 Nota has responded to his wife Berita’s tweets about their marriage and defended his comments about influencer Mihlali.
Image via Twitter
@lavidanota
@mihlalii_n

Nota has responded to his wife Berita’s tweets about their marriage and defended his comments about influencer Mihlali.
Image via Twitter
@lavidanota
@mihlalii_n

Days after likening influencer Mihlali Ndamase to an object that “is for sale” and his estranged wife, Berita, calling him out for being “reckless”, Nota Baloyi continues to trend on social media.

But now, the music mogul has responded to the backlash surrounding his controversial comments.

In a Twitter thread, the SAMA-winning singer revealed that she was currently separated from the rapper and music commentator. Berita also revealed that she left her marital home in January out of fear for her life.

Berita also issued an apology to Mihlali – of which the influencer accepted – for her husband’s comments.

Responding to Berita’s Twitter thread, Nota acknowledged that all was not well in his marriage.

He tweeted: “For the record, I love my wife. We’ll pray through this. All couples have challenges, but communication is key. I have not been able to communicate with her. Until I do, I will continue to pray for her peace & wellbeing. As for my mental health, I will never let anyone trivialise it!

Nota added: “They say a man will embarrass you. A woman will humiliate you. There’s a difference in how a man responds to humiliation as opposed to how a woman responds to embarrassment. That tells you everything you need to know about dignity. No matter what happens between you, keep it tidy!”

MIHLALI COMMENTS: ‘MY STATEMENT WAS TAKEN OUT OF CONTEXT

Meanwhile, Nota has attempted to clarify his statements about Mihlali.

Speaking to TshisaLIVE, the muso claims that his words were “taken out of context”.

“I have nothing to say against Mihlali. I have no personal issues against Mihlali, my statement were taken out of context. What I was speaking about was in the context of the objectification of women in SA and how it can have deadly consequences.

“The last thing I would want to read in the headline is that someone has taken Mihlali’s life because she said she has a R30 000-a-month girlfriend allowance.”

“There is no other way to put it, the people that have got an issue with what I said are people who want to exploit women, who want to traffic women, and who want to ensure that women continue to be to be abused.