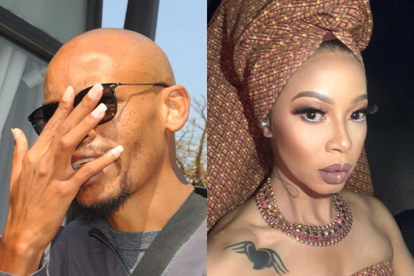 South African entertainment manager Nota Baloyi has not stopped making controversial statements on Twitter despite facing tons of backlash and even facing lawsuits. And now in his latest rant, Nota Baloyi attacks not one but four people, one of which is his own grandmother.

His tweets have received quite a bit of traction as people either agreed with him or implored him to get his mental and emotional health checked out.

Many social media users have even started questioning his mental health after reading some of the things he has been saying on his Twitter page.

Despite all of this, Nota continues to fire shots unprovoked at a number of people.

His latest targets appear to be local singer Kelly Khumalo and her ex-boyfriend and father to her child, Jub Jub.

Weighing in on the pair’s parenting of their son, Nota called on the pair to do better. According to Nota, Kelly should be giving Jub Jub a chance to be a part of his son’s life.

He also criticised Jub Jub for focusing so much of his time and energy hosting the controversial reality TV show Uyajola 9/9 which is centered around catching couples who are cheating on one another.

“Jub Jub needs to spend time with his son. He’s trending every weekend for catching cheating couples and putting a spotlight on infidelity. Kelly Khumalo must burn in hell for denying her son a relationship!” he wrote.

The post received a number of reactions from people who wanted to share their thoughts on Jub Jub and Kelly Khumalo.

“The pettiness embedded deep in some women, Gawd dam!! Give the boy some time with his dad.”

“I can’t imagine Jub Jub’s pain of being denied your own son. painful to only watch his son on tv and can’t get to hold him. Cant parents put their differences aside for the sake of the little man.”