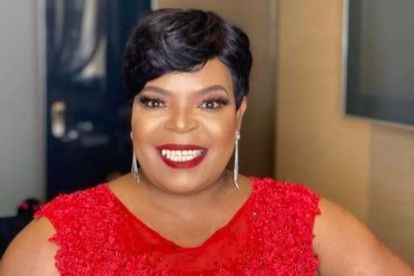 Malope took to Twitter the day after the alleged incident and stated how hurt she is but didn’t mention any names.

Gospel singer Dr Rebecca Malope says she’s hurt and she’s never experienced such disrespect after it was revealed that she was told to ‘f*ck off’ by Bucy Radebe’s manager and husband Thapelo Thoboke at the Sun City event this past Saturday (30 April).

Malope who’s been in the music industry for over two decades also asked her fans to pray for her heart to be mended.

One of the singer’s fans revealed in a series of tweets:

“On Saturday, we attended Bucy’s live recordings where Dr. Rebecca Malope was invited as one of the guest artists. For someone of her calibre, she didn’t deserve the treatment she got.”

“She was treated unfairly and even told to f**k off if she wanted to by the manager of the main artist.”

“I happened to hear the conversation and see everything unfold and my heart was broken by what transpired. This indicated a lack of respect for artists and mistreatment.”

“You have seen her comments on social media about what happened and she constantly says I have never been disrespected like this in my whole life.”

“But Dr. Rebecca Malope being herself still went on stage to perform and honoured her invite.”

“There was no formal apology from Bucy and team. This is really sad for someone who sings Gospel and claims to preach about God.”

WHO IS BUCY RADEBE?

Phumulani Asnath whose stage name is Bucy Radebe is a gospel singer who’s performed on multiple platforms, according to Briefly.com.

She began her singing career as a background vocalist for artists such as Solly, Takie, and many more artists before becoming a recognised gospel musician.

Radebe is reportedly married to her manager Thapelo Thoboke as she was spotted with a fancy ring on her ring finger in 2020.