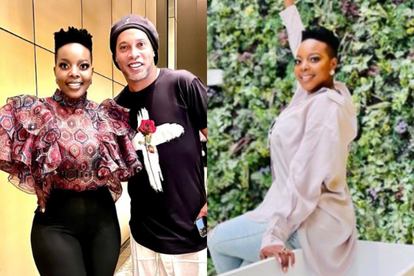 Nomcebo met Ronaldinho in Dubai a few days ago. Images via Instagram: @nomcebozikode

Nomcebo met Ronaldinho in Dubai a few days ago. Images via Instagram: @nomcebozikode

South African musician Nomcebo Zikode has gained international success with her and Master KG’s Jerusalema. People across the world were jamming to the song in 2021 when it was first released and even started a dance challenge that went viral. Despite this, it appears that Nomcebo – who is a star herself – can still have fangirl moments over other celebrities.

She recently had a big fan moment after meeting international soccer star Ronaldinho.

Nomcebo is living her best life and hasn’t slowed down ever since she became an international success with her hit song Jerusalema.

The singer has been performing the song all over the world and it has opened up a number of opportunities for her including more overseas performances.

On 13 May this year, the singer was performing in Dubai when she met one of her favourite sports stars, Ronaldo de Assis Moreira who is popularly known as Ronaldinho.

Taking to her Instagram page, she shared a photo of the two of them together which she captioned:

The post has left many of her supporters feeling all sorts of inspired to do great things. Many of them flocked to the comment section to marvel at how far she has come as an artist and the amazing things she has experienced so far.

“Because dreams do come true.”

“My two favourites! I’m super happy for you big sis!”