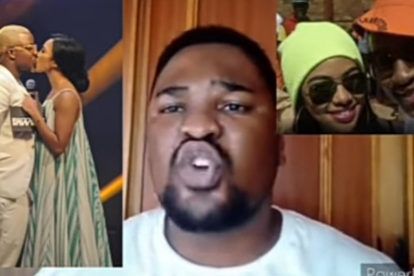 The news of Amanda allegedly getting sexually abused by Jub Jub is finally settling in for many South Africans who appear to be trying to make sense of the situation. Things have become even tenser after Jub Jub wholeheartedly denied the claims. Now YouTuber Slik Talk has come out to slam Amanda as a liar.

Since the moment Jub Jub sat down to the interview on Mac G’s Podcast and Chill, South Africans knew there would be trouble. Many of them tweeted excitedly ahead of the interview as they waited to hear which bombs the TV presenter was going to drop.

Bombs were certainly dropped by Jub Jub who spoke about his relationship with Kelly Khumalo, dealing prostitutes in prison, and dating Amanda du Pont.

Shortly after he made this revelation, Amanda claimed that she had suffered emotional and sexual abuse during the relationship.

And now Slik Talk, one of South Africa’s most controversial YouTubers, has made another video. This time he slams Amanda for “lying” about getting raped.

“… Everything she said in that video is completely false. I don’t believe a word she is saying. Amanda Du “Fraud” we don’t believe you, you need more people.”

He also added that Amanda was “obsessed with powerful men”

“You have an obsession with powerful men. Jub Jub is successful now and you want to clout chase on this man’s name…”

His clip received mixed actions from locals who either sided with Amanda or are rooting for Jub Jub.

It seems many people are unsure of what to think now that Jub Jub has denied sexually assaulting anyone and is also demanding an apology from the women who leveled these claims against him.