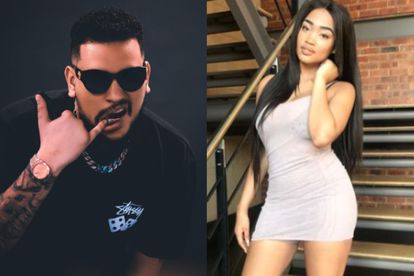 Video vixen and rapper Nicole Nyaba slammed her ex-boyfriend rapper Kiernan Jarryd Forbes, popularly known as AKA and claim she has media personality Bonang Matheba’s nudes on an episode of Gigi Lamayne’s POV podcast on 30 August.

AKA and Nicole Nyaba sparked romance rumours when they were spotted together while he was dating Bonang Matheba. In an interview with Gigi Lamayne on her podcast POV, Nicole claimed that “she started kicking it” with AKA in 2018 when he claimed he was single.

She claimed that he used her vulnerability against her.

“He used my vulnerability at that time and my kindness … When I think about it now there was no need for him to lie to me and make it seem like we’re in a relationship when we’re not,” she said.

She also called him a “devil”.

ALSO READ: ‘Sounds like I’m selling Tupperware’: AKA puts his money on United

NICOLE CLAIMS SHE HAS BONANG’S NUDES

Gigi asked Nicole if she really had Bonang’s nudes and she denied trying to gaslight.

Watch the full episode below.

AKA REACTS TO THE PODCAST

The Fela in Versace said he was surprised to hear that Nicole was speaking about him because he hasn’t spoken to her in about five years.

“I’m fairly surprised that I’m the topic of discussion that Nicole would choose to be speaking about me especially because I haven’t heard from or spoken to her in over five years, but she’s a sweet girl and I wish her all the best,” he said to Tshisa Live.