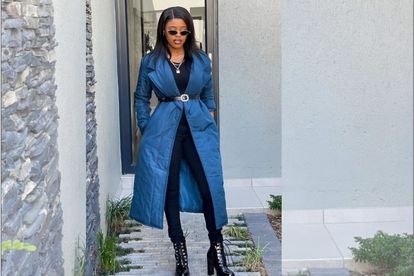 Natasha Thahane has been slammed for using government contacts for funding. Image via Twitter @MissReedJacko.

Natasha Thahane has been slammed for using government contacts for funding. Image via Twitter @MissReedJacko.

Last week, Natasha Thahane became one of the many South African celebrities to join Mac G on his podcast. While the interview was slammed as boring, things quickly became interesting after Natasha made a revelation. She is now being dragged by locals who believe she took advantage of her connections.

South African media personality and actress Natasha Thahane is usually the country’s sweetheart. Because of this, she’s often praised for her good looks and sweet nature but it seems this image is being torn apart.

The Blood and Water actress has found herself at the center of criticism. This is because she revealed that she received an R1 million scholarship from the government.

Speaking to Mac G she explained how the money went towards her fees for one semester at the New York Film Academy.

This did not sit well with netizens

Many were outraged by the fact that Natasha had received R1 million for one semester from the government. Especially while other students were struggling with NSFAS. Many of them felt upset that it was so easy for her to use her contacts while other students had to march against the high costs of tertiary education fees.

“Natasha Thahane merely exposed and verbalised how the world actually runs and works: nepotism, cronyism, and privilege are how the elite remains in that class for generations, by looking out for each other. Meritocracy is a myth and lie that’s used to silence marginalized people.”

“Damn man, the Natasha situation is happening in the midst of the ANC losing Metros…, the timing is off and the disadvantage is that the ANC has lost more young people. You fumble the youth you forfeit the future.”

Meanwhile, former DA leader Mmusi Maimane has also weighed in and asked Sports, Arts, and Culture Minister Nathi Mthethwa to explain how and why Natasha was given R1 million to study abroad.

“I hope you can have a conversation with the nation about this academic funding. How much it was, how it was processed and your reflections on your personal use of networks to access state support. I think you do owe the public that much, Natasha,” he said.

“Mr condolences Nathi Mthethwa, we also need clarity from your office about the disbursement of these funds,” he wrote in a lengthy tweet.