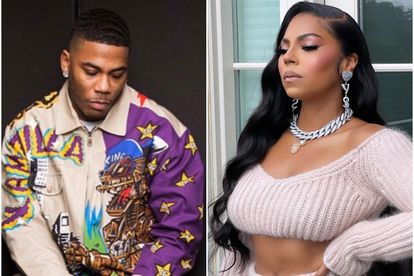 The hip-hop & R&B stars – who split in 2013 after a decade of dating – were seen embracing during a live Verzuz concert featuring fellow artists Fat Joe and Ja Rule.

And the moment stood still for fans of the former power couple, who begged them to give their relationship another chance.

IF BENNIFER CAN DO IT, SO CAN NELLY AND ASHANTI, SAY FANS

Ashanti – who herself battled singer Keyshia Cole in a Verzuz battle earlier this year – was brought out as a supporting act for rapper Ja Rule, where they performed their smash hit songs Always On Time and Mesmerize.

Nelly – who recently broke up with his longterm girlfriend Shantel Jackson – was a guest of Fat Joe at the concert which took place in Madison Square Gardens in New York City.

But despite their separate performances, it was clear that neither knew that the other was going to be there. In clips circulating on social media, a stunned Nelly can be seen walking over to Ashanti where he asks to give her a hug.

And fans of the couple could not contain their excitement, with many reminiscing over their romance of the past. Some even wanted them to give it another go like celebrities Jennifer Lopez and Ben Affleck, who recently reconnected.

“@Nelly going to get @ashanti like Ben went and got Jennifer as soon as she was single again,” tweeted one fan.

Another added: “Nelly broke up with his girl right? I’m here for an Ashanti Nelly reunion that’s a 2000s couple I care about”.

“Nelly and Ashanti in the same building? I mean we’ve all seen Bennifer”, said a third.

NELLY HAS COMPETITION FROM NICK CANNON

But if Nelly has any desire to rekindle his romance with Ashanti, he may have to fight off competition from another celeb – Nick Cannon.

The Wild N Out presenter flirted up a storm with the singer, who wore a sexy dress to the MTV Video Music Awards on Sunday night.

He even jokingly proposed to her on the red carpet!

And Nick is even taking on a rap career like Nelly – he revealed his new persona is called Murda Count Harlem.