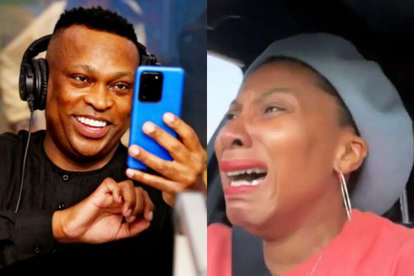 Robert Marawa does not have Penny Lebyane’s time. Images via Twitter: @robertmarawa/@pennylebyane

Robert Marawa does not have Penny Lebyane’s time. Images via Twitter: @robertmarawa/@pennylebyane

Last week, South Africans were left outraged after the government announced plans to build an R22 million flag. Since then, many local celebs have joined in on the bashing. In contrast to popular opinion, Penny Lebyane – a local TV presenter – thinks it’s a good idea and compared the pricey flag to Europe’s Eiffel Tower and America’s Statue of Liberty.

Sportscaster Robert Marawa has since slammed Lebyane in a rather scathing tweet.

“Obviously @NathiMthethwaSA is not liked by a whole industry that hates itself so nothing new there for me. But l have a question. How did they build your favorites The Eiffel Tower in Parys, Statue Of Liberty in New York, Christ The Redeemer in Rio De Janeiro? Why do u like them?” wrote Lebyane on Twitter earlier today.

Marawa slammed this tweet by arguing that the monuments in those countries cannot be compared to a flag, he also reminded Lebyane that there are millions of impoverished people who could benefit from that money.

“They were NOT flags!! They were NOT vanity projects in a struggling economy of mass youth unemployment caused by a thieving government!!” he wrote angrily while sharing some information on the Eiffel Tower and the Statue of Liberty.

The pair’s argument went back and forth and ended with Marawa telling Lebyane that it would do her well to think before she tweets – something many people who were following the argument, agreed with.

Marawa’s response received many thumbs up from social media users who couldn’t agree more. Many of them commended him for putting Lebyane in her place.

“Thank you Marawa. Penny just doesn’t get it. The minister wants to get involved only when a SA player comes back with an award. Then he’s ready for the cameras, but what did he do to make sure the player can even make it overseas?”