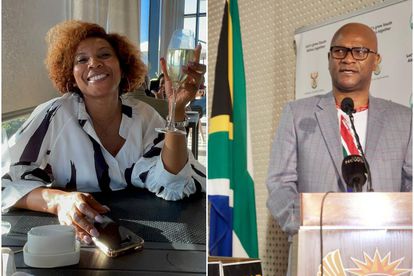 That’s because the radio personality has seemingly defended the controversial move made by the department of arts and culture.

THE FUSS OVER A FLAG

On Tuesday 17 May, Minister of Arts and Culture Nathi Mthethwa defended the department’s decision to spend R22 million on a flag project.

The minister presented a “feasibility study” before the sports, art, and culture portfolio committee. In his presentation, he claimed that the project would be a positive addition to the country’s heritage.

He stated: “It carries and epitomises democratic values”.

But whilst social media users slammed the exorbitant price of the flag project, Penny Lebyane tweeted a different perspective.

She tweeted: “Obviously @NathiMthethwaSA is not liked by a whole industry that hates itself so nothing new there for me. But l have a question. How did they build your favorites The Eiffel Tower in Paris, the Statue Of Liberty in New York, and Christ The Redeemer in Rio De Janeiro?  Why do you like them?”.

Denying she had been “paid” for her tweet, she continued: Personally l don’t hate the minister l just work, make the best of every situation or opportunity for myself & l will wear a SA dress/Flag anywhere in the [world]”.

Amid the backlash, she added: “I have not studied the feasibility document on the flag to cost R22 million so I’m limited there. But it doesn’t sound like a lot of money for something that will outlive me. Hating the minister can’t be the reason why creatives themselves don’t commit to fixing their problems”.

Robert Marawa responded: “They were NOT flags! They were NOT vanity projects in a struggling economy of mass youth unemployment caused by a thieving government!”.

DJ Olwee clapped back saying: “Penny, this is ridiculous expenditure. The Eiffel Tower was built to celebrate 100 years of the French revolution. The Statue of Liberty was a gift from France for the US’s liberty. These were to celebrate progress and the betterment of people’s lives. What are we celebrating?”.

Phil Mpela voiced his opinion about the flag fiasco, stating: “Penny, but this is wrong on many levels. To compare Eiffel Tower & statue of liberty to this is way off base. The Statue of Liberty and many monuments were funded by donations and fundraising. Also, the times dictate the need for such expenditure & now is not right”.

And Sol Phenduka reacted to Penny’s defence of the flag project: “The big tourism companies should sponsor this project as a proudly South African initiative and show of patriotism. Not a PENNY of tax money should go towards it”.