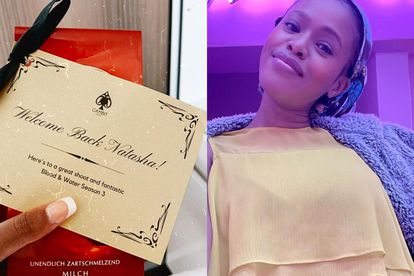 Actress Natasha Thahane revealed that she has returned to the set of Netflix’s Blood & Water today (17 May) after she gave birth to her baby.

Natasha Thahane has just confirmed that she is on Blood & Water season three. Many questioned if the actress will appear on the Netflix original series after she announced her pregnancy, but she hinted that she has been filming while pregnant as well. Natasha plays the role of Wendy Dlamini on the series and last season ended with a potential romance for her character.

Natasha penned a message to the producers of the series Gambit Films and Netflix as she returned. If you swipe left on the photos you will see the actress sporting her baby bump while on set. So, it seems she has been filming while she was pregnant and returned to set after giving birth.

The actress is believed to have given birth to her baby in late April, but she has not revealed who the father is.

“BLOOD AND WATER SEASON 3. ????. I thought I should take a moment to appreciate and acknowledge the individuals who have gone far beyond anything I anticipated. May their kindness be returned multiple times over, for what they have done and continue to do for me. Thank You Gambit Films & Netflix. ❤️???? @gambitfma @netflixsa @netflix,” she captioned the post.

Many are speculating that it may be Orlando Pirates player Thembinkosi Lorch because the pair were believed to be in a relationship since they were spotted together on “baecation” in Zanzibar in June 2021.

However, Lorch has neither confirmed nor denied that he is the “baby daddy.”

The South African reached out to Lorch for comment but there was no response at the time of publishing.

Controversial YouTuber Slik Talk dragged Natasha and Lorch when the actress announced her pregnancy. He also said that she can no longer play Wendy on Blood & Water.

“How are you going to justify to Blood and Water to play a teenager when you have a whole baby, you think it’s going to let you play an 18 year old when you have a baby. That’s not gonna happen,” he said.

“Natasha we all know that as a female actor when you have a baby in your 20s it’s probably one of the biggest mistakes you ever made in your life,” he continued.

ALSO READ: Slik Talk ‘warning’ revisited: ‘You don’t make a baby with a guy like Lorch’