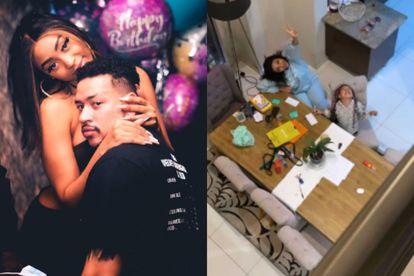 AKA shared an Instagram story of his seven-year-old daughter Kairo Forbes spending time with his girlfriend Nadia Nakai. The pair are seen sitting next to each other with big smiles. Take a look…

The rapper shares Kairo with DJ and businesswoman Ntombezinhle Jiyane, popularly known as DJ Zinhle. DJ Zinhle and AKA have a good co-parenting relationship. The Umlilo hitmaker also has an 11-month-old baby named Asante with musician Murdah Bongz. She also has a good relationship with Nadia. Controversial entertainment  commentator Musa Khawula claimed the pair were “showing fake love” to each other in a video.

However, DJ Zinhle clapped back saying her family is good.

“This video is not fun, people prefer hate & bitterness between women for their own entertainment… it’s not gonna be us.. our family is good.. sorry to disappoint,” she tweeted.

NADIA REVEALS SHE WANTS BABIES WITH AKA

The rapper previously told Sowetan Live that she would love to have AKA’s babies one day. This was after she watched him be a “great” father to Kairo.

“We didn’t plan to become a couple, it just happened. I’ve witnessed how great he is as a father; of course, I’d love to have his babies one day,” she said to the Sowetan Live.

The Naaa Mean hitmaker also revealed that she and AKA have a lot of common and there wasn’t a specific time that became “official”.

“There wasn’t a specific time that we told ourselves we were an official couple because we were just really good friends. We’d speak for long hours over the phone and share so much in common,” she continued.