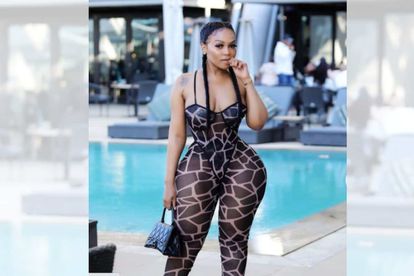 Muvhango actress and businesswoman Tebogo Thobejane set the internet ablaze when she posted a video of herself twerking on Instagram this past weekend.

It seems she recently let her hair down and enjoyed some time out with friends and subsequently posted a video walking to the venue and later twerking for the camera. Her fans were loving the video, saying that her “walk is mean” and that she looks “soooooo fine…absolutely amazing gorgeous babe”.

Other s promised to leave their number in her inbox!

Tebogo recently said she was able to put down an impressive deposit on her fancy home thanks to selling pictures and videos of herself on the social media website, Onlyfans.

Tebogo spoke about her time on Onlyfans in a recent YouTube interview with Macgyver “MacG” Mukwevho in addition to opening up about her past relationship with the father of her child, what it was like growing up with Herman Mashaba as an uncle and what happened to her dad’s business relationship with Mashaba.

“Onlyfans money started it, that was the deposit,” said Thobejane after MacG complimented her home. “Onlyfans nne ile monate (Onlyfans was a great time),” she added.

When co-host Sol Phenduka asked why she spoke about the site in the past tense, Thobejane said she was done with being a content creator for the site.

She then recalled how she was prompted to start creating content for the site at the beginning of lockdown due to the fact that she could no longer earn an income from hosting evenings at nightclubs.

She initially tried to host private parties. However, the income was nothing compared to what she would have ordinarily made hosting at night clubs. So she turned to Onlyfans at the behest of some friends she had overseas.

Her father’s friendship with Herman Mashaba

Her father, Obed Thobejane, has been referred to as a co-founder of the cosmetics brand, Black Like Me. However, for years, most of the credit has gone to former Johannesburg mayor Herman Mashaba.

“Papa Herman is somebody that I grew up with. My dad and papa Herman were very good friends when they were young.”

You can listen to the rest of the interview down here: