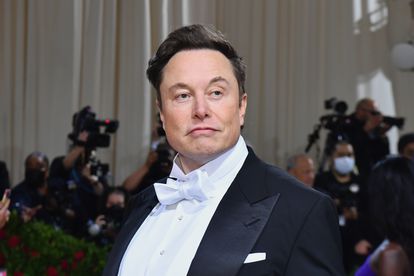 Photo taken on 02 May, 2022, Elon Musk arrives for the 2022 Met Gala at the Metropolitan Museum of Art in New York. – Elon Musk on 10 May, 2022, said he would lift Twitter’s ban on former US president Donald Trump if Musk’s deal to buy the global messaging platform is successful. “I would reverse the ban,” the billionaire said at a Financial Times conference, noting that he doesn’t own Twitter yet, so “this is not like a thing that will definitely happen.” Photo: Angela Weiss / AFP

Photo taken on 02 May, 2022, Elon Musk arrives for the 2022 Met Gala at the Metropolitan Museum of Art in New York. – Elon Musk on 10 May, 2022, said he would lift Twitter’s ban on former US president Donald Trump if Musk’s deal to buy the global messaging platform is successful. “I would reverse the ban,” the billionaire said at a Financial Times conference, noting that he doesn’t own Twitter yet, so “this is not like a thing that will definitely happen.” Photo: Angela Weiss / AFP

Billionaire Elon Musk said Tuesday his bid to buy Twitter won’t proceed unless he gets proof of the number of spam accounts plaguing the platform, adding more uncertainty to his roller-coaster pursuit of the social media giant.

This latest twist to his $44 billion (about R700.5 billion) move to acquire the key platform sparked speculation over whether the world’s richest person was trying to shrink the price tag or even back away from the deal.

Hours after Musk’s early morning tweet over bots, Twitter insisted the deal push through and without delay.

“Twitter is committed to completing the transaction on the agreed price and terms as promptly as practicable,”

the company wrote in a statement accompanying a filing to US regulators.

Musk last week tweeted his bid for the company was “temporarily on hold,” pending questions over its estimates of the number of fake accounts, or bots.

Then early Tuesday he pushed for more information, writing to his almost 94 million followers on the social network: “Yesterday, Twitter’s CEO publicly refused to show proof of <5%.”

“This deal cannot move forward until he does,” he added.

Twitter chief executive Parag Agrawal has said the platform suspends more than a half-million seemingly bogus accounts daily, usually before they are even seen, and locks millions more weekly that fail checks to make sure they are controlled by humans and not by software.

Internal measures show that fewer than 5% of accounts active on any given day at Twitter are spam, but that analysis cannot be replicated externally due to the need to keep user data private, Agrawal contended.

Musk posted that the real number of bots may be four times what Twitter claims and “could be *much* higher,” and has said he would make getting rid of them a priority if he owned the platform.

“So how do advertisers know what they’re getting for their money?”

Musk tweeted in a subsequent response about the need to prove Twitter users are real people.

“This is fundamental to the financial health of Twitter.”

The process used to estimate how many accounts are bots has been shared with Musk, Agrawal insisted.

According to an estimate published Friday by software firm SparkToro, 19.42% of Twitter accounts are fake or spam, but the company acknowledges its methodology for determining bots is likely different from that used by Twitter.

SparkToro has a tool on its website that shows more than 70% of Musk’s followers are fake accounts.

“It appears the spam/bot issue is cascading and clearly making the Twitter deal a confusing one,” Wedbush analyst Dan Ives said in a note to investors.

“The bot issue at the end of the day… feels more to us like the ‘dog ate the homework’ excuse to bail on the Twitter deal or talk down a lower price.”

Twitter shares “will be under pressure this morning again as the chances of a deal ultimately getting done is not looking good now,” Ives said, adding it is “likely a 60%+ chance from our view Musk ultimately walks from the deal and pays the breakup fee.”

Another tech watcher, Grady Booch, tweeted to Musk that it

After sliding ahead of the market bell, shares of Twitter were up slightly in Tuesday trading.

Meanwhile in a filing to the Securities and Exchange Commission, Twitter urged its shareholders to vote in favor of Musk’s buyout for $54.20 per share in cash, at an upcoming special meeting.

Musk has described his motivation as stemming from a desire to ensure freedom of speech on the platform and to boost monetization of a website that is massively influential but has struggled to attain profitable growth.

He has also said he favored lifting the ban on Donald Trump, who was kicked off the platform in January 2021 over concerns the ex-president could incite violence.