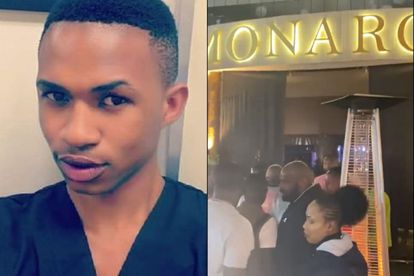 Musa Khawula was kicked out of a popular Sandton in the early hours of Sunday 11 September. Images via Twitter @MusaKhawula

Musa Khawula was kicked out of a popular Sandton in the early hours of Sunday 11 September. Images via Twitter @MusaKhawula

Controversial blogger Musa Khawula was one of a few social media stars who were invited to the inaugural DStv Content Creator Awards on Saturday 10 September. After the awards at The Galleria in Sandton, Khawula attended the after party and went to a popular nightclub for some more fun, but things took a turn…

MUSA KHAWULA IS KICKED OUT OF POPULAR NIGHTCLUB

Taking to Twitter in the early hours of Sunday 11 September, Musa Khawula shared that he had been kicked out of Monarch, a popular nightclub in Sandton, Johannesburg. Khawula went on a night out after attending the star-studded DStv Content Creator Awards.

“Can’t even go drink a lil bit, not me getting found out at Monarch, Sandton and being kicked out for no reason, lol,” he wrote in his tweet.

In a second tweet, Khawula accused the nightclub of allegedly running a “sex house”. He further claimed that he was kicked out of the club because of who he is.

“I think Monarch, Sandton is running a sex house otherwise why was I pulled out and told we know you,” he wrote.

Weighing in on Musa Khawula being kicked out of the Sandton nightclub, one social media user said the blogger was kicked out because he posed as a “threat” to their patrons.

“‘Right of admission is reserved’. They kicked you out because you post a threat to their patrons, which in turn will make them feel uncomfortable and make them lose business,” wrote one tweep.

“I wish this could be happy every time you go out,” wrote another tweep.

“They said ‘you will not bring your ghetto here.”

“You’re an alleged murderer, of course people would be uncomfortable having you around.”

WHAT HAPPENED THE LAST TIME MUSA WENT OUT ON THE TOWN?

On Sunday 21 August, the Twitter blogger and Gomora actor Moshe Ndiki came to blows at the White Lounge in Sunninghill, Johannesburg.

The pair were enjoying time with their friends and Khawula claimed that Moshe “followed him, tracked him” and “attacked him”.