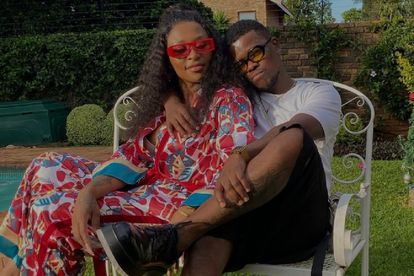 Murdah Bongz gave a funny response to a pic of a fan kissing DJ Zinhle during one of her sets. Image via @murdahbongz/Instagram

Murdah Bongz gave a funny response to a pic of a fan kissing DJ Zinhle during one of her sets. Image via @murdahbongz/Instagram

It seems Murdah Bongz may have some stiff competition if he is to keep his girlfriend and baby mama DJ Zinhle. This is after the Indlovu DJ was seen blushing while a man kissed her on her hand during a gig.

The two love birds (real names Bongani Mohosana and Ntombizinhle Jiyane) are one of Mzansi’s favourite celebrity couples. Together they have a beautiful baby girl whose name is Asante Mohosana. The Era By DJ Zinhle founder also shares six-year-old cutey, Kairo Forbes, with rapper AKA whom they are happily co-parenting.

But now it seems a fan wants to break up a happy home and the Black Motion DJ is having none of it!

DJ Zinhle took to her Instagram to share a picture of a fan kissing her hand as she did her thing on the decks during a gig. In the video, Zinhle appears to be blushing like a girl who has her heart snatched.

After seeing the pic, Asante’s father was green with envy and hilariously replied like a man who is about to lose the love of his life.

Picture him with his hands on his head and a surprised look on his face as he replied, “Hao NKOSIYAMI kwenzakalani? [Oh MY GOD what is going on?”

ALL THE WAY IN PORTUGAL

Murdah Bongz’s response garnered a lot of comments from fans who told him to quickly come home or else he is going to lose his girl.

The Black Motion DJ was actually all the way in Lisbon, Portugal, when a fan tried to steal his bae from him.

In an Instagram post, he thanked the Tribute of Afrohouse Festival attendees for an amazing night. To which Zinhle replied with a sweet message, “There’s no one like you baby!!! I’m so proud of you!”