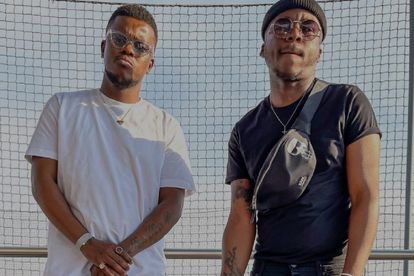 Murdah Bongz replied to a fan on Instagram after it was alleged that Black Motion is splitting and the DJ had rebranded. Image via @realblackmotion/Instagram

Murdah Bongz replied to a fan on Instagram after it was alleged that Black Motion is splitting and the DJ had rebranded. Image via @realblackmotion/Instagram

South African house music fans have been heartbroken since rumours emerged that Bongani “Murdah Bongz” Mohosana and Thabo “Smol” Mabongwane will no longer be making music as the much-loved duo Black Motion.

When news broke on Friday 29 April, fans blamed Murdah Bongz’s famed relationship with his baby mama DJ Zinhle, saying “he has lost himself”.

However, Murdah Bongz – who is also a DJ – responded to a fan who asked him about the alleged split on Instagram, also taking to his stories to rubbish the claims in a cryptic post. The duo also later released a statement on social media.

Controversial social media entertainment commentator Musa Khawula announced to his followers that Black Motion have decided it was time to part. Musa, who has been dubbed SA’s Wendy Williams, has been trending all week on Twitter for breaking news related to all things entertainment in Mzansi.

Dismissing the rumours, Murdah Bongz replied to a fan who asked if the news of the split were true by simply saying “no”.

The father-of-two also took to his Instagram to write a cryptic post in IsiZulu which read: “What I’m seeing is nonsense.”

In the wake of the rumours and Murdah Bongz’s response, the duo took to social media to release a statement.

Calling the claims “damaging and untrue,” Spirit Motion on behalf of Black Motion confirmed that there is no split.

“Spirit Motion would like to state on record that Black Motion members Thabo Muhogwane uka Smaland Bongan Mohosana aka Mordshbongs have not parted ways. Black Motion still exist and has plans for more years to come.”

“The only change which does not affect the dan is that Mardan has rebranded himselt from Murdah to Mörda. This is because he is preparing to launch his sole career as a DJ, but still remains part and parcel of Black Motion.”

In addition, Smol is also venturing into other business aspects which will be announced once they are solidified.