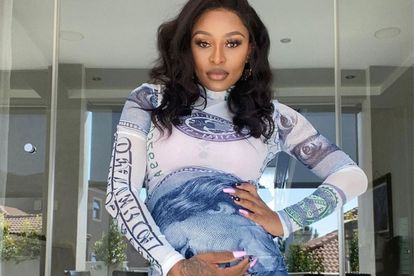 Following DJ Zinhle’s pregnancy announcement last night (23 August), she took to social media today (24 August) to confirm that Murdah Bongz is in fact the father of her child, although nobody doubted it.

In a double announcement post, DJ Zinhle revealed that she has an upcoming reality show titled Expect The Unexpected and she confirmed her pregnancy. Towards the end of the trailer for her reality show, the DJ is seen cradling her baby bump that she kept hidden for what seems to be a good few months now.

She followed up with an official “baby bump” post today as she subtly confirmed that her boyfriend, Black Motion’s Murdah Bongz is in fact the father of her child.

DJ Zinhle and Murdah Bongz each already have one child. The Umlilo hitmaker has a six-year-old daughter with rapper AKA and Murdah Bongz has a son who is almost a year old from a previous relationship.

ALSO READ: DJ Zinhle shows off her bae Murdah in ‘out of this world’ birthday post

It is unclear how far along in her pregnancy DJ Zinhle is. However, her beautiful bump is already quite visible. DJ Zinhle did not refrain from posting pictures of herself while keeping the news a secret, so here is a look at five times she hid her baby bump.

Just after the rumours of DJ Zinhle’s pregnancy started the Hair Majesty owner posted a picture of herself in what seems to be a tracksuit and sneakers with a trench coat over making it difficult to spot her baby bump.

“Starting the week with a positive mindset… Hope you’re feeling inspired and ready for the week ahead, wishing you a happy and productive week,” wrote Zinhle in the caption.

In the next post, DJ Zinhle is seated in such a way that her hands cover her tummy area so her baby bump could not be seen.

“It’s a new week, what are you looking forward to? I am happy to be back in business with @boulevard.rose.. ???? Grateful for your support on @erabydjzinhle and @hairmajesty_by_djzinhle. Have a blessed week! Swipe left for a closer look at my watch. ????,” wrote DJ Zinhle in the caption.

DJ Zinhle posted a picture in a massive pink kimono-styled throw over when she announced that her beverage brand Boulevard Rose is available at Pick N Pay Liquors.

“Big Announcement‼️ Please celebrate with me ???? @boulevard.rose is now available at @picknpay liquors ???????? remember alcohol is only available from Mon – Thurs only so go out and get yours now ❤️‍,” wrote Zinhle on Instagram.

The Era By DJ Zinhle owner posted several up-close selfies where her 3.8 million followers were often unable to get a full view of her body.

The Indlovu hitmaker also posted throwback pictures to her Instagram. During the cold front South Africa experienced last week, the star posted a snap of herself in swimwear. She did hint that the picture was a throwback by asking if anyone else was waiting for summer.