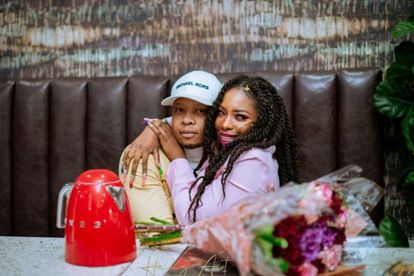 Mr Smeg and Gigi Lamayne hit it off on their national date.
Image via Twitter
@michaelbucwa

Mr Smeg and Gigi Lamayne hit it off on their national date.
Image via Twitter
@michaelbucwa

It was a red, hot hook-up between Twitter personality Mr Smeg and female rapper Gigi Lamayne who went on a “national date” over the weekend

And the chemistry was undeniable between the pair, who met for the first time on Sunday to the delight of their fans.

It all began in a tweet when Mr Smeg – real name Michael Bucwa – asked Gigi Lamayne to have lunch with him in person. The hitmaker said yes, and the pair agreed to meet at The Hang Awt in Tembisa – a restaurant owned by DJ Shimza

Ahead of his date, Mr Smeg – known for his love of the luxury brand’s red Smeg kettle – snacked on “raw liver”.

Bearing a beautiful bunch of flowers, Mr Smeg was dressed by local clothing label Palse as he arrived in style. He even brought his kettle along too!

Gigi came dressed to impress too, with a pink tuxedo-style dress and black thigh-high boots. A gracious guest, Gigi also brought along gifts for Mr Smeg, and posed for pics with his sister too!

And judging by the pics – the pair hit it off exceptionally well! Mr Smeg and Gigi downed tequila shots as they flirted together and indulged in deep conversation.

After meeting the star, Mr Smeg tweeted: “She looks stunning. My Gosh she smells great too”.

The couple even went in for a kiss! “I’m so happy”, Mr Smeg tweeted following the date.

And the verdict did not seem good. Whilst Gigi praised her date for being a gentleman and treating her respectfully, she hinted at “friend-zoning” Mr Smeg.

Gigi tweeted: “I had such a beautiful conversation with @MichaelBucwa yesterday and something I thoroughly learned was that his love for appreciating people who never get their flowers is what he does.

“And although all of you assumed a lot, his intentions are pure and genuine. He really enjoys making people feel special and loved but he moves with so much wisdom. Thank you for opening my heart and mind. Thank you for being real with me.

“Thank you for giving me the flowers that I never got because it was easier for people to throw me in the dirt at my lowest. I know who I am now and it’s even better than a black brother reminded me of that. I have a friend and confidante in you for life. Thank you!”

Mr Smeg previously went on a “national date” with actress Pearl Thusi in December 2021. The date went well and the duo agreed to meet again – on Valentine’s Day this year. Unfortunately Pearl cancelled the date at the last minute, leaving Mr Smeg crushed.