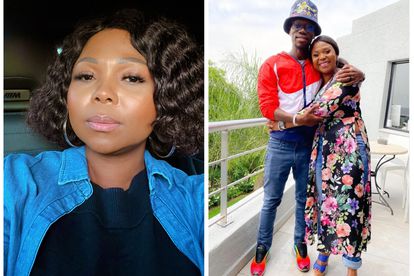 After weeks of speculation about the status of her marriage, Mpho Maboi has clapped back at online rumours.

The sports presenter was rumoured to have split from her retired soccer star husband Reneilwe “Yeye” Letsholonyane.

Last month, Mpho Maboi fuelled speculation she had split from the former Bafana Bafana star after she reverted to her maiden name on her social media accounts.

Fans of the couple were alerted to rumours all was not well by controversial celebrity blogger Musa Khawula who shared his allegations on Twitter.

Mpho and Reneilwe married in 2018 and share two children together. However, as of late, the two have not been seen publicly together on their social media accounts

On Instagram, Mpho last acknowledged Reneilwe in a birthday post on June 9 2021. The TV and radio personality also did not acknowledge her wedding anniversary in March on social media, as she would previously do in the past.

Reneilwe last posted a picture of Mpho Maboi on his Instagram feed in September.

This week, Musa stirred the pot again with rumours that Mpho Maboi and Reneilwe had gone their separate ways

Reposting a picture of the star in a luxury BMW, the blogger tweeted: “Mpho Maboi showing off her car after divorcing Refiloe Letsholonyane who is heavily in debt and had his car repossessed by BMW”.

Musa was referring to a Daily Sun report which claimed that Reneilwe had been taken to court after he allegedly stopped paying instalments on his BMW 118i. However, Musa incorrectly referred to Mpho’s spouse as “Refiloe”

Spotting the tweet, Mpho Maboi clapped back: “Do you know I bought a car? And who’s Refiloe? Talk about me being back on radio dawg. At least that’s a fact!”.

On Friday 1 June, Mpho Maboi made her radio return to Kaya FM on the drive-time show.

And despite the rumours, Reneilwe showed his love and appreciation for his partner by commenting on her Instagram post. He replied under her post: “Congratulations are in order. Mazikhale Ke [Let them talk].