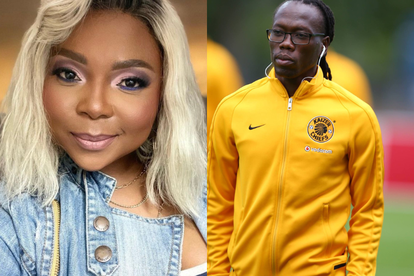 SuperSport broadcaster Mpho has removed her married surname Letsholonyane on her social media accounts and reinstated her maiden surname Maboi amid rumours that she and former Kaizer Chief player Reneilwe “Yeye” Letsholonyane are getting divorced.

Notably, Mpho did not post Letsholonyane on their anniversary in March this year as she normally would in the past. Could this be another indication that there are trouble in paradise?

Mpho and Yeye reportedly dated for close to 10 years before tying the knot in a traditional ceremony back in 2018. They also have two children together.

Some social media users have claimed that Yeye is a serial cheater and that he and Mpho have already broken up three times in the past.

Some are however of the view that Mpho is alleged to have left Letsholonyane because he is now retired from football and claim that he is no longer making as much money as he used to.

“People saying you left Yeye because of money is a lie!! You might not know me, but I know how much Yeye was a serial cheater!!! Very uncontrollable! The venue him and shabba owned in Soweto where they would bring girls there??? I’m glad you chose peace over everything sis,” a Twitter user going by the handle @Lejaka1 responded to a tweet by Mpho.

“I saw this one coming.? I knew it was gonna be hard for Yeye to keep her when the money is no longer the same. Unfortunately Yeye is such a great dude,” @NhlivoT said.

In May this year, Daily Sun reported that the retired soccer star was taken to court by BMW Financial Services after he allegedly failed to pay the instalments for his BMW 118i.

The 39-year-old allegedly bought the car in 2015 and was supposed to pay about R7 500 over 71 months, as well as a balloon payment thereafter – which he failed to do.

BMW reportedly started taking action in 2020 through a letter of demand from its lawyers, Velile Tinto and Associates.

It is not yet clear whether or not BMW successfully repossessed Letsholonyane’s car.