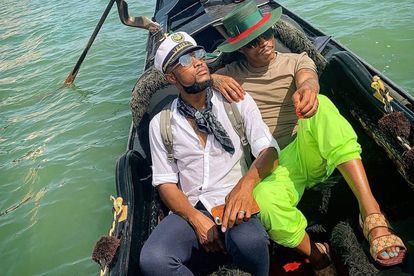 Actor Mohale Motaung clapped back at a suggestion he should spend a night at the new Sanctuary Mandela hotel with his estranged husband, Somizi Mhlongo via a tweet on 16 August.

MOHALE ON SPENDING A NIGHT WITH SOMIZI

The Nelson Mandela Sanctuary hotel located at the heart of Houghton, Johannesburg opened on 1 August, allowing guests to sleep in the bedroom of the late former president Nelson Mandela for R15 000 a night, at his Houghton Estate residence which has been converted into a boutique hotel.

Mohale Motaung mentioned a friend named Eddie in the comments section of an article on the hotel and a Tweep asked him to go with Somizi. Mohale clapped back saying “Ei, uyaphapa maan!” which means “you are forward” when translated to English.

Since the abuse allegations, Somizi has taken some “time off” from his radio gig on Metro FM and his judging role on Idols SA.

Although the couple have both confirmed their divorce, they have shared some special memories together.

“I wish to confirm that we are indeed in the process of a divorce,” said Mohale.

“As far as the divorce itself is concerned, my only aim is to have it finalised fairly and reasonably,” said Somizi.

Here is a look at some of Somhale’s vacations back when Mohale was willing to spend the night with Somizi.

In August 2019, the couple took the “baecation” of a lifetime as they jetted off to Italy, where they lived their best soft lives.

In July 2020, the couple had tongues wagging when they took a private jet to KwaZulu-Natal to enjoy Somizi’s luxury Zimbali mansion.

The estranged couple took a bush adventure to &Beyond Ngala Tented Camp located in Timbavati, at the Ngala Private Game Reserve.