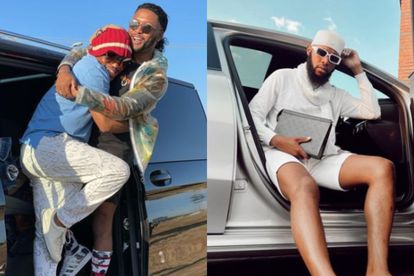 Mohale Motaung broke his silence on Somizi Mhlongo’s “bestie” Vusi Nova on his Showmax special which was released on 4 August. This comes after Vusi Nova said that he did not like Mohale and how Somizi changed during their relationship.

Mohale said that when his relationship with Somizi was taking a toll, Vusi would be the one to intervene and ask The Black Door star to fix things. So, he was shocked to hear Vusi say that he did not like him.

“When the relationship was taking its toll and we were not okay, Vusi would always be the one to intervene. He would call me and say ‘please fix things with my friend’ and that’s literally the only time,” he said, admitting that he was shocked that Vusi did not like him because they hadn’t spent much time together.

Mohale went on to say that Vusi only came over to their marital home about three times.

“Vusi came to the house probably three times when I was there, so I wasn’t sure how he reached the conclusion to say he didn’t like me,” he added.

So, what exactly did Vusi say about Mohale? Well he said he never liked him but he just tolerated him. This was because Somizi loved him.

“Did I like Mohale? No. I only tolerated him because Somizi loved him so much and that love he never got back,” said Vusi in his piece to camera.

He also said that Somizi lost himself while married to Mohale.

“Because for me I felt at some point, you kind of lost yourself within the relationship. You became someone that I didn’t understand. Since you met this boy, somewhere half way-through you met this boy, you change, Somizi,” he said.

“I can’t even tell Somizi be strong because he is strong, one of the strongest people I know. I know he is going to continued doing great things and I am always going to be right behind you, always,” he continued.

This comes after Vusi and Somizi took several “bestiecations” together sparking rumours of romance between the pair. However, they have denied romance rumours.