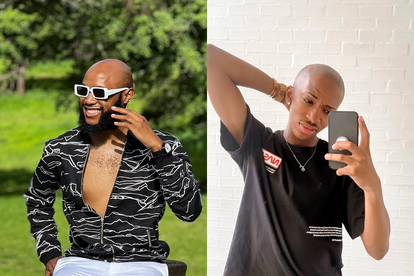 Somizi Mhlongo and Mohale Motaung’s relationship has been the talk of the town for some months now. The pair publicly separated after Mohale accused the Idols SA judge of abusing him both emotionally and physically. Both of them have since moved on and it appears that media personality Lasizwe Dambuza is trying to make his move.

Lasizwe gets flirty with Mohale

Somizi and Mohale are definitely over and will not likely rekindle their romance. The pair split up quite some time ago, though it’s not clear what’s happening with the divorce proceedings.

Despite this, both of them have been spotted with other people over the last few months and this is something Lasizwe has clearly been keeping his eye on.

The young YouTuber and reality TV star publicly shot his shot at Mohale and there’s no denying it. Taking to Twitter, Lasizwe commented on Mohale’s photo by asking him for his number.

The two then engaged in some flirtatious banter by referencing a popular song called Big boys. Mohale asked Lasizwe if he wanted to “bamba” and Lasizwe responded that he is definitely ready to play with the big boys. Look at their exchange below:

Of course, tweeps were not going to let this slide and were soon in the comment section sharing their thoughts. Look at some of their comments:

“And don’t come here crying once he’s done with you…coz this one doesn’t play, he’s gonna do to you what he did to Somizi.”