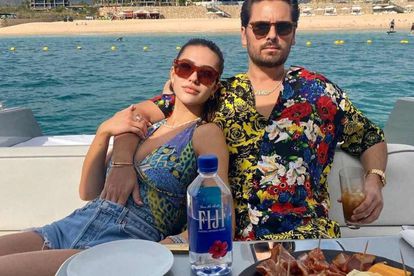 The 38-year-old TV star and Bendjima, 28, allegedly exchanged messages with each other about Kourtney Kardashian’s public displays of affection with her new boyfriend Travis Barker and Hamlin is now reported to be unhappy with Scott’s comments.

Amelia was definitely annoyed by Scott DMing Younes about Kourtney, but she’s not going to do anything about it and they’re still together. They are spending Labour Day in New York and planning to go to The Hamptons and then be in NYC for Fashion Week.

Disick questioned the behaviour of his ex-girlfriend in a private exchange with Bendjima, which he then posted online.

And although Disick is now seeking to draw a line under the situation, he feels embarrassed by the controversy.

Scott is trying to move on from the whole situation, but is a little embarrassed that he reached out to Younes and that he posted their exchange.

Disick – who has Mason, eleven, Penelope, nine, and Reign, six, with his ex-girlfriend – allegedly sent Bendjima a paparazzi shot of Kourtney and the Blink-182 rocker, 45, making out on a boat and wrote a message which read:

Yo is this chick ok!???? Broooo like what is this. In the middle of Italy.

However, the ex-boxer hit back at Disick and insisted he doesn’t care what his ex gets up to as long as she is “happy”.

Doesn’t matter to me as long as she’s happy. PS: i ain’t your bro.

He captioned the screenshot:

keep the same energy you had about me publicly, privately.