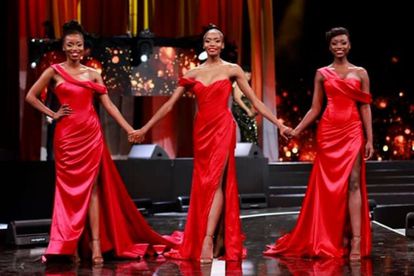 We officially have a new Miss South Africa, but it’s safe to say that social media fans are divided over the new queen and her runners-up…

Lalela Mswane took the crown on Saturday at the GrandWest Casino and Entertainment World in Cape Town at a glittering and star-studded ceremony.

Moratwe Masima and Zimi Mabunzi were placed as 1st and 2nd runners-up respectively, and made history as the first trio to be comprised of black women.

Many Miss South Africa viewers and social media users were elated over the Top 3 selection – and particularly that the women were all black.

“Top 3 black queens! History has been made #MissSA2021”, tweeted one user, whilst another added: “Black women winning. I love it!”

On the flipside, some tweeps were annoyed at the “lack of diversity”.

“Miss SA is slowly turning into Black Economic Empowerment. White women are there just clap hands for our girls these days,” tweed one user.

Another added: “I just worry that Miss SA doesn’t seem to have inclusion and diversity”

A third tweeted: “At what point are we gonna crown white, Indian or coloured women?”

One tweep even accused the contest of being “rigged”.

“White and coloured women should stop entering because the contest is obviously rigged for the majority.”

‘LET’S NOT MAKE THIS ABOUT RACE’

Others argued that race should not be a factor and that any criticism was unjustified.

“I don’t understand how this is now about race, I thought it was about women”, said on tweep.

“It’s not blacks winning but a well deserving woman winning. Let’s not make this about race,” tweeted another

A third tweeted: “The people who deserve to win, win. It has absolutely nothing to do with race”.

And a few brought up the history of the Miss South Africa pageant and how the “tables had now turned”.

“There was a time when Miss SA was won by white women (mostly) and no one had a problem with it but now that black girls are shining people are talking about diversity and racism”, posted one tweep.