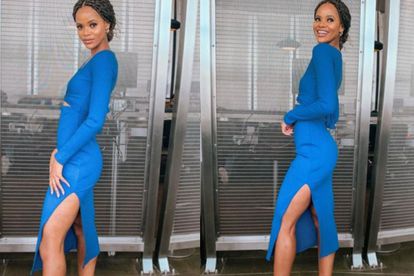 Miss SA Ndavi Nokeri rang in the season of spring by changing up her look as seen in an Instagram post on Thursday 1 September.

MISS SA CHANGES UP HER LOOK FOR SPRING

Ndavi Nokeri previously often rocked a high ponytail but now she has debuted her faux locs. She took to Instagram to ring in spring with a flattering blue outfit from Forever new which she pair with black heels. Take a look…

“Spring is a lovely reminder of how beautiful change can truly be. Happy Spring Day! ????,” she wrote.

Ndavi was crowned Miss SA on Saturday 13 August at the SunBet Arena, Times Square in Pretoria. Ndavi is only the third beauty queen from Limpopo to be crowned Miss SA. She is also the second Miss SA from Limpopo in the last two years following in the footsteps of Miss SA 2020 Shudufhadzo Musida.

The first beauty queen to be crowned Miss SA from Limpopo was Bokang Montjane who was the titleholder in 2010. Bokang competed in Miss Universe 2011 and Miss World 2011.

Miss SA officially had her homecoming in Limpopo last weekend. The 23-year-old kicked off her homecoming with a visit to Greenside Primary school in Polokwane and a street parade in the Limpopo city.

“For a girl from Gabaza to be seen, embraced and chosen to represent her country is a groundbreaking moment. A moment that reaffirms that our dreams are valid, regardless of where we come from,” she said in her acceptance speech.

“I am grateful for the women who have gone before me who broke the glass ceiling so I could stand here today empowered, fulfilled and ready to proudly raise the South African flag high everywhere I go and to shine the light of hope to all South Africans,” she continued.

“This homecoming tour has been an unmitigated success.I’ve seen people come out for Miss South Africa queens on other homecoming tours, but this turnout was simply

ALSO READ: Who is Miss SA 2022? Five things to know about Ndavi Nokeri