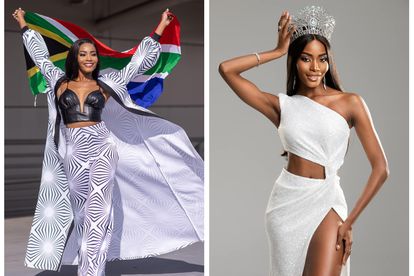 Miss Supranational Lalela Mswane is expected to complete her Miss SA duties next week when returns to SA.
Image via Facebook
Miss SA

Miss Supranational Lalela Mswane is expected to complete her Miss SA duties next week when returns to SA.
Image via Facebook
Miss SA

With the Miss SA pageant less than a month away, the reigning queen – Lalela Mswane – is busking in the victory of her Miss Supranational win earlier this month.

The 2021 pageant winner scooped the title of the international pageant on 15 July in Warsaw, Poland. However, despite previously being done, organisers will not be crowning a successor in the interim of her reign.

Lalela is currently still in Poland and will be returning home next week.

IS LALELA MSWANE MISS SUPRANATIONAL AND MISS SA AT THE SAME TIME?

According to News24, Lalela will begin her Miss Supranational duties after she hands over the Miss SA crown next month.

Organisers told the publication: “As Miss Supranational, Lalela will be primarily based in South Africa. She will use the title not only to pursue her own aspirational goals but also remain a servant of the people. Wherever there is a need for her to be, she will go.

“She will also be travelling to many countries worldwide on behalf of the Miss Supranational Organisation to promote the brand and be a voice for young women”.

Last week, Lalela met with the SA ambassador in Poland Nomvula Mngomezulu as part of her official meet and greet.

The 24-year-old is expected back to return to Mzansi with a grand homecoming celebration. She will attend the 2022 Miss SA finale on13 August at the SunBet Arena in Pretoria.

Previously, when Miss SA queen won an international pageant, her runner-up was crowned her successor.

This occurred in the case of Zozibini Tunzi handing over the Miss SA reigns to Sasha-Lee Olivier and Demi-Leigh Nel-Peters to Ade van Heerden when they won the Miss Universe pageants in 2019 and 2017 respectively.

Rolene Strauss handed over her title to runner-up Ziphozakhe Zokufa in 2014 when she won the Miss World title.

Lalela Mswane’s reign as Miss SA  – and her participation at Miss Supranational – has not been without controversy.

In December, Lalela was ridiculed after she defended her decision to participate at the Miss Universe pageant in Israel. The department of arts and culture also distanced itself from her.

Lalela also faced backlash after organisers revealed she would be participating in Miss Supranational – her second international pageant during her reign. South Africans on social media expressed their frustration at the pageant not affording the Miss SA runners-up – Zimi Mabunzi and Moratwe Masima –  the opportunity to represent the country at international pageants.

Pageant CEO Stephanie Weil defended the decision in a statement. She said: “It is also not uncommon for the same representative to attend more than one international competition during their year of reign — should the international pageant’s dates and timeline allow for it”.

The pageant has also been questioned over it’s decision to not implement a second and third place, as previously done.