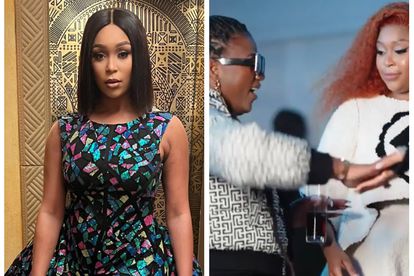 Minnie Dlamini has rubbished claims she is feuding with MaMkhize following a viral clip.
Image via Instagram
@minniedlamini/
@kwa_mammkhize

Minnie Dlamini has rubbished claims she is feuding with MaMkhize following a viral clip.
Image via Instagram
@minniedlamini/
@kwa_mammkhize

Minnie Dlamini has poured cold water over claims she has beef with Shauwn “MaMkhize” after a clip of her seemingly giving the older woman the side-eye went viral.

In an Instagram post from earlier this month, fans accused the media personality of being shady towards to Royal AM boss during a night out.

Minnie, MaMkhize, and others were guests at a party at Ntosifiso Garden in Kwaggafontein, Mpumalanga.

But was it all a big misunderstanding?

Taking to Instagram, MaMkhize posted a video about her epic night out at the star-studded event on Saturday 9 July.

The mom of Andile and Sbahle Mpisane was invited to a party thrown by businessman Bafana Sindane.

In the clip, MaMkhize was flanked by a number of celebs including Kefilwe Mabote, Pearl Thusi, and Minnie Dlamini. Cassper Nyovest reportedly performed at the event.

But whilst MaMkhize was seen embracing Pearl and dancing with Kefilwe, her interaction with Minnie Dlamini raised some eyebrows.

According to many followers, Minnie gave the soccer boss a “side-eye” look that left many surprised.

“Our biggest enemies are those we eat and drink with”, said one follower. Another added: “Is that Minnie giving you that jealous look?”.

From what they’ve previously revealed to the public, Minnie and MaMkhize have a firm friendship with the latter referring to the younger star as her “baby sis”.

Days after the clip between her and MaMkhize went viral, Minnie Dlamini took to her own Instagram account to prove that all was well.

The Homeground presenter posted a clip of a TikTok video of a man jokingly warning others not to date women from the “Mkhize” and “Dlamini” clan. According to the man, doing so would warrant “danger”.

But Minnie laughed off the video tagging MaMkhize. “Uthini lo?” [What is he saying?] she asked the businesswoman.

MaMkhize also found the clip funny, commenting: “Hayinoboooo udlala Ngathi thina nawe [you are playing with us]. We are Zulu girls and very sweet”.